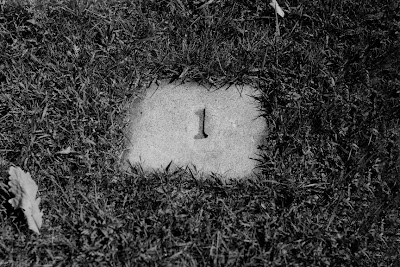 The Rum River Trail in Anoka runs between the River (naturally) and the Anoka Treatment Facility. Now it is a rehab center, but for many years it was a State Mental hospital that was, over the years, home to thousands of people who for one reason or another had lost the “thread.” The grounds are somewhat diminished now, but there are ruined walls and old foundations nearby that indicate its former size. At the north end of this area is the cemetery. It was for those who died there and had no family interested in claiming the remains. It is still maintained, at least the lawn is mowed, but this graveyard needs little care. Instead of headstones, there are small concrete blocks, 395 of them, set flush to the ground. A few of the blocks have been swallowed by trees. Each block has a number embossed in it. That's all. No names, d.o.b or d.o.d. The one exception is a granite marker next to number 267. I’m supposing that some family member overcame the stigma of having a relative “in Anoka” and memorialized her.

As is common in old cemeteries, the ground has shifted as the coffins below disintegrate. Here and there you see burrows of small animals among the plots.

Lying on the ground near the entrance to one burrow is a bleached white bone.

that has to be one of the most depressing visuals I've had thus far! I mean, it doesn't seem like much, but in a description such as that...I just want to sob endlessly and label each headstone myself! giagh!

...I'm sorry, it was very disturbing to me. I don't know what to think about it.