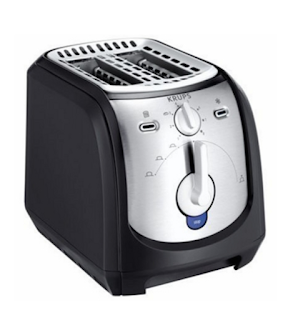 With the thought of spending another morning with that smoking, chattering, POS toaster that I have had for the last ten years, (who was it at Black and Decker that thought their tool-making expertise would transfer to kitchen appliances?), I reluctantly assumed the role of consumer. I was no impulse shopper on this trip, however, for I did my homework by consulting consumer magazines, online searches and in store comparisons. It's a good thing that I did - the world of toastology has changed greatly in the last decade. I soon found myself in a terra incognito of strange jargon and new features:

“Bagel technology” - A little better, except it is a toaster I need, not a bagel engineer.

“Use of extension cord may cause FIRE OR DEATH” - well, enough high carb toast with butter may cause death also.

“Optical Browning Sensor” - this can detect the proximity of certain a romantic poet? Or a hunting rifle?

I finally made my choice - European Engineering (designed by a infamous German Arms Maker), a simple lever, an easy to understand knob, a warming tray on the top (something I have actually wanted in the past!) and even a Bagel Button. I brought it home, read the manual (Do not use in or near the bathtub! - Drat! I‘ll have to forgo my daily shower toast!) and tried it out. It worked perfectly, with only a faint aroma of Teutonic superiority.

The world is full of unrest, troubles and war. My life is a series of innumerable setbacks and defeats. At least I can have one simple pleasure: perfect toast.

Toasting - There's an art to knowing when, never try to guess, toast until it smokes, then 20 seconds less.