Monster From The Radio Tube 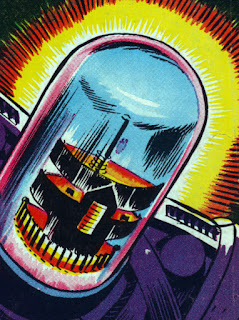 Vacuum tubes (valves in the UK) are almost a thing of the past.

There are still four uses for these elegant electronic devices:

1. Monitors (TVs) and these seem to be on the way out, way too heavy, full of lead and being replaced by a variety of new technologies. Still in use by millions.
2. Microwave ovens have a tube that you never see (it is carefully shielded‚ these tubes put out a lot of energy. Also used by millions.
3. Radio transmitters - again, lots of power handling, not in domestic use.
4. Audio amplifiers - Mostly guitar amps and esoteric audiophile gear . There is still a difference, I always find it amusing to see a band play with 50 or 60 year old amplifiers (or their modern-day clones.)

When I was young, transistors were just coming into the marketplace, most radios had these glowing glass jars in the back, each like a little ship-in-the-bottle or a snow globe, except instead of a yar vessel or a bucolic scene, there was a strange metal sculpture inside, the mad construct of a demented engineer. Some tubes had a blue glow that would pulse in sync with the music, all of them were HOT. My friend Andy even wrote a short story about one of these artifacts coming to life—growing in size and terrorizing the neighborhood. This update on “War Of The Worlds” ended with the malevolent tube being banished to the moon, where you could see its ruddy glow in the dark areas of a partial moon. In later years, I actually went the trouble of learning how tubes work, ultimately building my own guitar amplifier. Every so often, if I am playing my guitar with the lights out, I’ll take a little peek at those “monsters” in the back of my amp, and recall Andy’s story with a smile.

And don't forget - the smell from one of these amplifiers - sort of like a particle board oven - yes, those were the days!

I'll never forget the time my friends the VibroChamps almost set the Uptown Cheapo on fire with thier vacuum tube amps. They were doing a smoking in house performance, when about 10 songs into the set, Daves 'Vibro Champ' started on fire! I was yelling and stuff, but I always do that and they did not pay any attention. By the time someone in the band noticed... well, shit was 'a burnin! Show OVER.