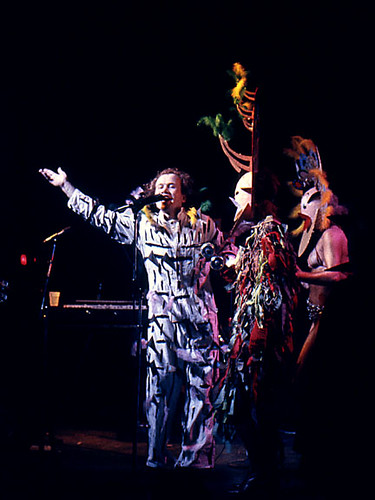 Back in my show-biz days, I seldom rose above ‘working the toilets’ circuit. One band that did elevate things was The Wallets, a keyboards-sax-bass and drums outfit, led by the visionary Steve Kramer. The Wallets weren’t really a ‘show’ band, but they certainly had their moments. One notable tune was In The Congo, complete with jungle drums, animal cries and an extended bridge that always got a big reaction. Halfway through the song, the lights would be doused. The aforementioned cries and drums would reach a pinnacle of cacophony. Then, a couple of us in the crew would start waving flashlights around. In the dark, you really didn’t know what it was that you were seeing. Then Mr. Kramer would whip out his rubber snake, wrapping around his neck and torso. People started screaming. Lit by our feeble flashes, it really looked alive. Cost of this stage effect: about $20. I'm sure there are still some deluded souls that would swear that the snake was real. It was close enough for a couple of hundred judgment-impaired moshers.

The Wallets were awesome, we used to go see them at some dive bars around Mpls. Their best song, to get the crowd jumpin' had to be "Naked". I can still here Steve Kramer singing "They were naked, they were totally nude" I don't remember the rest of the song. Maybe that is why I have always liked the word naked.