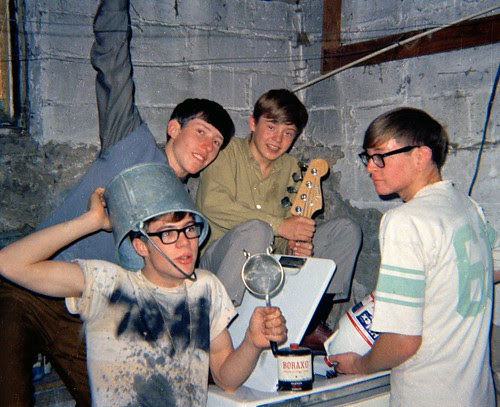 We lost Tom last Sunday. We are The Others, the rock band I was in when I was a teenager. Tom was the lead guitarist, the shining light, and the only one of us that knew anything about music theory and composition. Tom had suffered with juvenile onset diabetes since he was a boy; he finally succumbed after having spent most of the last decade in a nursing home, dying a bit at a time as he lost toes, fingers and limbs. In the competitive world of garage bands I grew up in, the highest praise you could give someone was that "he could play". Tom could play. We had gone separate ways after high school, I only saw him a few times between then and when he went into the home.
We got the old band together, along with every one else we could find from our class that had played rock, for our 30th reunion about seven years ago. Tom made it too, in a wheelchair, helped out by his sons. He was his usual self, wisecracking, critizing our "stiffness" and I'm sure that he wished he could be up on stage to show us how it was really done. He taught us all how to play, to make every note count, and give it our all. We were kids together, and in the halls of memory we will always be kids. But he is gone now, absolutely and for ever. And with his passing that part of my childhood has come to an end.

Please play a song for me in memory of Tom. I was a juvenile diabetic for all my life before my transplant. You have my condolences.