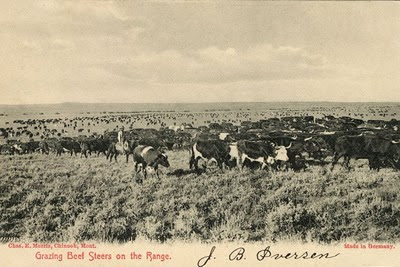 1958 was a watershed year in my childhood. It was the year of the great western family vacation: South Dakota, Wyoming, Montana and North Dakota, in our brand new '58 Ford. The Dakotas and Wyoming were fine, with all the usual picture-postcard scenery and the tourist traps (yes, we did stop at Wall Drug!) But the high point of the trip, what made it transcend the ordinary, was a stay in Chinook, Montana, where one of my dad's brothers lived with his family, and where my dad's sister-in-law, the widow of another of my dad's brothers, lived with her son. Now Chinook is a small town, a little east of Havre, on the north central plains. My Dad's brother had four or five kids, two boys, two girls and some other boy, now grown up, who had some kind of unexplained relationship to us. All of us cousins had fun together, visitors to this part of Montana were somewhat scarce at that time, none of my other relatives ever went out there. Montana was a lot wilder than Minnesota, we did things that were unheard of for this eight-year-old: playing poker till 2 a.m., fun games with liquid mercury (!), shooting off fireworks(and not ladyfingers either!), target practice, dropping water balloons on unsuspecting townsfolk, teasing their 'pet' magpies, and many other pranks. After three or four days of this, we went home and forgot all about our country cousins.

Ten years later. I was a student at the University. On Thursdays my last class was over at noon; I took the bus home. I was home alone, everyone else was at work or school. The phone rang. The operator's voice said "will you accept a collect call from ____, in Havre Montana?" It was my uncle. In a trembling voice he explained that his younger son, the one my age, had been 'out hunting' with his cousin...something happened...he had been shot to death...it was an accident.

As I grew older, the missing parts of the story began to get filled in. Montana was a wilder place than Minnesota. Fun with cars, and booze, and guns. My cousin who pulled the trigger spent the next thirty years drunk, and died from a fall while drunk. His father had died drunk, found frozen to death in a feedlot 45 years earlier. His grandfather - my grandfather - had died drunk. My uncle and aunt never got over it. When they'd come to visit they'd look at me closely, and always commented on the fact that I was the same age as the son they lost.