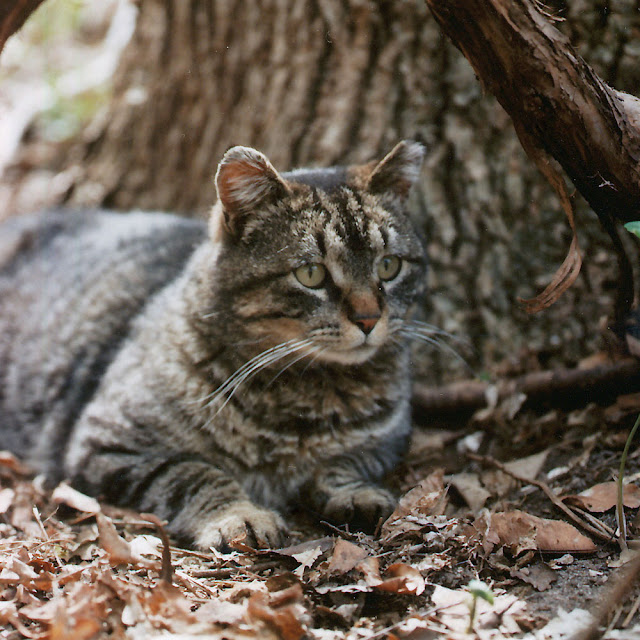 Buster, the king of the feral cats of Anoka, stands, or rather lies, on guard at the feral cat compound. His job is easier this spring. All the cats have been neutered, and the overall tension level has dropped considerably. No more yowling, hissing, fighting over mates and social position. Once in a while one of the younger cats will approach Buster, perhaps to curry favor, or probe for weakness. Buster will dispatch them with a grimace, or perhaps a quick bat of the paw. Peace is restored. No kittens this year. None the next year either. With about 20% mortality annually, it will take about five years to eliminate the colony if the trap-neuter-release policy continues. Then the colony area will revert to raccoons, rabbits and vermin.

Some may infer that the application of such an approach may prove applicable to the control of the males of other species, notably homo sapiens. Any volunteers?

In the midst of my daily IM session with my mother, she informed me that we have six new kittens romping all over the yard back home.

That makes around thirty strays that dwell around my home. Egad!

...do feral cats cause Flippism? Another strange parallel in our lives...hmmm...

This cat is so beautiful! Thanks for the amazing image. It quieted me.

My pole barn full of gypsy cats is the reason I'm here? Brilliant! Thanks for the fantastic pic. and insight Batty.

Well it is October 2015, there looks to be 4 of the original bloodlines and 2 to 3 newer adults. They are all fixed. There were new signs put up this week, saying not to feed the animals. It all has to do with an organization that bought one of the builds, one of people running it, tried to convince me that the cats are dangerous. Oh yeah, the small fluff balls, that run away if they don't know you, are the dangerous ones, not the sketchy humans walking around. I have yet to read in the media how cats torture and kill humans. Then there is the other irony to it... it is a human homeless shelter that doesn't want us to feed the homeless cats. Even though the sign is up, we will feed them, until they get relocated soon.