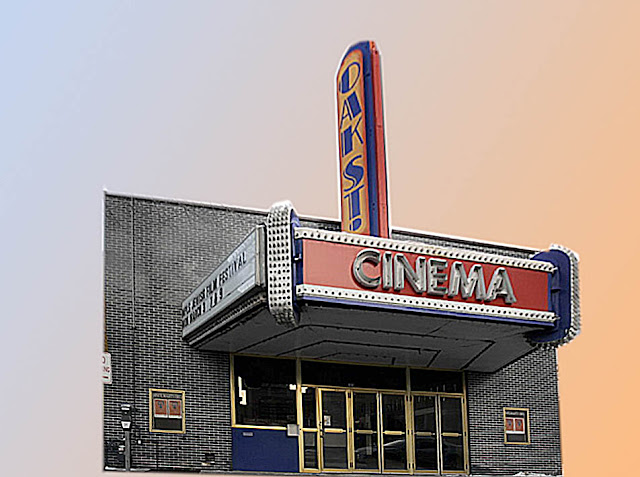 Went to the Oak Street (nee Campus) cinema tonight. There is an Icelandic film festival going on and the Weaver and I caught several short films and a feature, Niceland- which wasn't exactly Icelandic in theme- but a fine film nevertheless, with a good part of the production and the direction Icelandic. We got to the university area early, to grab a bite, and as we strolled among the shops, cafes and bars, I was reminded of my college years, spent on this same campus, with most of the same buildings still here; indeed, most of the buildings were nearly a hundred years old. Almost all the old businesses have turned over, but there are still a few that remain the same: Stub and Herb’s bar, a medical book store, the Army recruitment center and, of course, the cinema itself.

The cinema, despite all the technological changes of the last thirty-five years, has changed very little. The short films were actually projected video while the feature was traditional film. There currently is an intense pressure in the movie industry to convert all film-making to digital video, due to its cheaper cost of production. When this does come to pass, I fear that the movie-house may be phased out also. Why would you want to go to a theater to see what you can see at home?

I've seen projected video for a couple of years now, and it still is lacking in quality to film. If you make anything cheap enough, it will saturate the market and drive out any higher quality competition. And so the rule of the least common denominator wins out, and we are left the poorer.