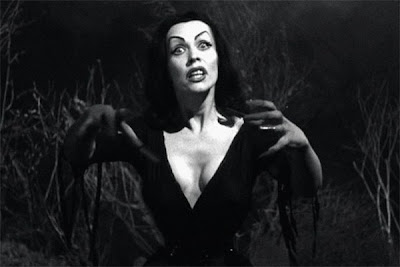 Midnight musings on paranoia (see previous post) and a lack of quality stimulation leads to extreme measures. Home alone, scanning the movie listings, the best entertainment option that came up was a midnight showing of Ed Wood's 1956 masterpiece Plan 9 from Outer Space. Supercharged on caffeine, I made the late night run to the Uptown theater where I ran into some of the crew from work (great minds run in the same gutter, I suppose.) Midnight showings are usually off-beat, but this was the "creme de la creme" of bad cinema. We laughed at some of the unintentionally hilarious dialogue and thrilled at the stunningly choreographed action scenes.

But even Ed Wood, in his own mixed-up way, had embedded a political time-bomb into this howler: a valid critique of current American foreign policy. The space invaders, when confronted by the authorities, give an eloquent justification for their actions, citing the refusal of the U.S. Government to communicate, it refusal to respect the rights of other civilizations to exist, its dangerous pursuit of all-out warfare, and how they, the aliens, have had to implement "Plan 9" to save themselves from destruction at the hands of the U.S. The administrations' denials, cover-ups and ineptitude strike eerie parallels for the current situation. The aliens' use of tape recorded messages, attacks on airplanes, and plots involving the gruesome killing of U.S. civilians is another weird twist with modern echoes.

But this prescience is only to be expected, for as the noted TV Psychic and Humbug Criswell intoned at the opening of the film:

"Greetings, my friends. We are all interested in the future, for that is where you and I are going to spend the rest of our lives. And remember, my friends, future events such as these will affect you in the future."

I simply must stop drinking coffee after 5 p.m.