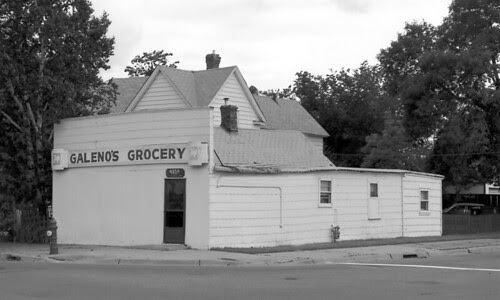 Another neighborhood grocery of my youth was the notorious "Galeno's", little more than a shack, a purveyor of pop and candy, with a few boxes of cereal and soap, toliet paper and little else lining the shelves. When I was quite young I would make the two-block trek there to buy baseball cards, cards that would be worth big money now. They were probably the only things of worth that were ever sold there, albeit taking thirty years to appreciate. When we were teens, the standing joke was that Galeno's sold stale pop. We always wondered how he managed to stay in business for forty years; the picture above was taken in the mid 1980's, not long before it was finally condemmed. Perhaps he sold numbers? He was always talking on the phone in the back room. For several years there was a trailer that his daughter lived in behind the store. We wondered about her also.