20:00 On my way to the venue Grand Rokk I ran into Harrison Ford! 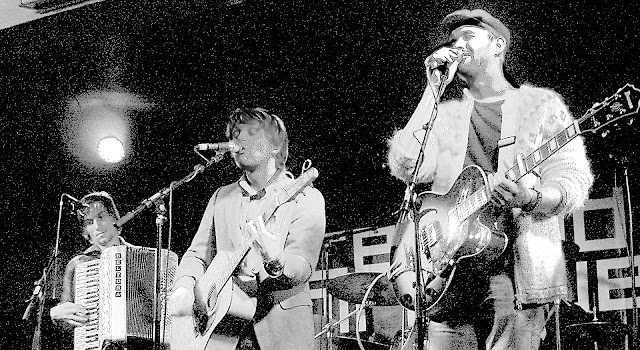 21:00 Retro Stefson came up. An eight piece teen-age combo with a charismatic Afro-Icelandic lead singer. A WHOLE LOTTA FUN. That’s what music is supposed to be all about, right? With the crowd full of photographers and moleskine-toting journos (i.e., me), there may be more heard of from these kids in the future. I must confess that the bass player isn’t really a teenager—he might be as young as TWELVE. You have to love it. The kisses the band got from fans as they left the stage says something about how adorable (and good) they were:

21:45 Sprengjuhöllin: Power pop for the masses. When they started in on a song that seemed to come from an album intended for dim children, I had had enough. By that time the crowd was too dense to prohibit much movement—‘Comfortably Cozy’—one might say. I manage to escape somehow:

22:30 Out on the street, beside Gaukurinn, a bigger venue, with a line stretched down the block. It's a beautiful night, nice to have some fresh air...until I get inside:

The density of this crowd can only be be described as “coitus close.” The American group We are Scientists were on, doing serviceable power trio riffs. Their last tune was the appropriately titled Making My Escape. It is hard to imagine anybody moving, much less escaping, but the crowd does turn over after their set.

23:30 Ditka starts up, with songs of sensitive angst. When the lead singer starts channeling Kurt Cobain, I make my way back outside... there are four more nights to go and discretion is the better part of valor:

BEST MUSIC OF THE DAY: The speech of an Icelandic coquette in hot-pot 3 at the Vesturbaejarlaug thermal pool (13:00). She was in an animated discussion (about working hours I believe), but all I could appreciate were the beautiful cadences and inflections of her voice.

Did I mention how much I enjoy being here?

ahh, my heart swells with pride at how accommodating the Land is being for you. With weather like this, who wouldn't love it here?

and I'm glad to hear you went to good old vbærlaug. I'm loyal to my ´hood.

I managed to escape but I was smart about it and left in the middle of the last song. It wasn't easy though. You should be happy you were out in the line and not inside when the band before We are Scientists, Noise, were playing. Their name is very fitting, it was just a lot of Noise.

I heard a cover of the Tom Waits song "A Little Trip To Heaven" on The Current by, I believe, Mugsefjun. It was good.