Cedric Adams And Me

CAUTION: Long and pointless post about someone from the past that almost nobody remembers, and even fewer care about. You have been warned. 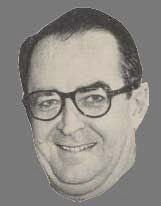 Cedric Adams was a Minnesota-based writer, radio and television personality, master of ceremonies and all-around bon vivant who was active from the early thirties until his death in 1961. He got his start writing patter and "snappy" jokes for the legendary Cap'n Billy's Whiz Bang which was some sort of a spiritual predecessor to Mad Magazine. He was an announcer at the pioneering WCCO radio, and became the biggest media figure in Minnesota for over two decades. If he were of this era, he would have blogs, podcasts, a cable show and would probably be considered a bit insane, but harmless (think Larry King.) I can't even imagine how much time I spent in my impressionable youth listening to this genial blowhard prattle on about nothing. At his peak he was doing seven newspaper columns, eight TV shows, and fifty-four radio shows each week. He was even interviewed on Edward R. Murrow's Person to Person (June 8, 1956.) In addition, he would tour the state with talent and variety shows- the acknowledged predecessor and inspiration to Garrison Keillor and his Prairie Home Companion. His rotund figure could be seen at all the finest of Minneapolis' restaurants and nightspots.

I was young, perhaps eight or nine, and an informal rite of passage of children growing up in the fifties was to be on a TV "Kiddie Show". All the local stations had at least one, some of which would, ala "The Peanut Gallery" on Howdy Doody, have seating for twenty or thirty youngsters, and would, at some point in the broadcast, pan the camera over our cherubic faces. A group of us kids went downtown (chaperoned by our mothers) and, because we were a bit early, found ourselves waiting on the sidewalk outside of the studio lobby. It was there where I spied the great man walking across the intersection arm in arm with a rather glamorous young woman.

"Hiya Cedric!" I shouted. He smiled the beatific smile of a local media star- and gave a friendly wave in our direction as he and his companion continued to the corner then into a nearby "lounge" (to rest, no doubt, from his busy schedule.)

"Was that woman Cedric's wife?" I asked naively.

"That was probably his secretary," said my mother, who seemed a bit put out by the whole scene. I absorbed this information but imperfectly, although I did think that it might be fun to walk arm in arm with an attractive young woman some day.

There is little on the internet about him now; his "work" really didn't age very well. It was short-form writing- gossip, factual tidbits, mild jokes and news read cold from the wire. The forerunner of USA Today?