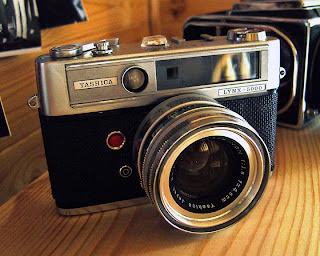 Got a package in the mail today. My first camera, or rather, the same model of a camera that I had purchased when I was a mere lad of 17. I spotted it on my recent trip to Seattle. It was in a funky camera store that was more of a museum than a vital retail enterprise. I kept obsessing about all week it until I finally broke down and ordered it last Saturday. It is in good cosmetic condition, although it needs a little work in order to become 100% functional. That doesn't matter, there's a strong possibility that it will never have another roll of film run through it. It's just sitting on my shelf now, joining its comrades-in-obsolescence. In its first incarnation it was used mostly to take pictures of girls. I don't do that so much anymore.

Will you attempt to recreate the first picture you took on that camera? :)