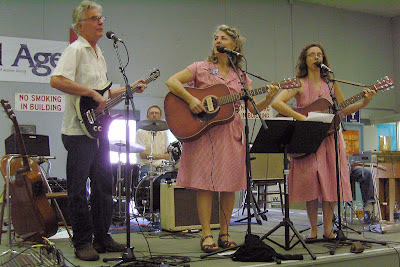 So the real reason I went to the fair was to see some old friends play on one of the many stages there. Now when I say old, I mean it- they were performing at the senior center, and although they may have been a little young to actually qualify as "Seniors" the music they were playing was mostly from the twenties and thirties, older than most of the seniors who exhibited there.

This was "parlor" music, or perhaps even "backporch" music, old folk songs (ie: Wildwood Flower) simple tunes, with plain stories, the banal elevated to art by its purity. Karen and Helen, the women in the photo, have been performing as a duo for several years now, they're even set to tour Scandinavia and Ireland in the fall. They were supported by some friends, "ringers" from the Minnesota music scene, guys who understood just what this music is all about. The thirty or forty people in the audience, some of whom just wandered in for a breather, enjoyed being played to, rather than at; all in all it was a delightful way to take a break from the maddening crowd.

Wow, they look 'the part'. Is there a link to hear some of their tunes?
We had Pat Benetar and The Village People at our local (county) fair this year but your 'old friends' look like a better headliner to me!
(Pat was great tho i must say....belting out all her old chestnuts).