Went to the "Great Minnesota Get Together" Saturday, and there were a scary amount of people there. I hadn't been there in nearly twenty years- it never really changes, there just seems to be more of it. The first thing I passed on my way in was the "Miracle of birth" center where one could see "One day old baby piglets!" One can only wonder about what happens to the two day old piglets: 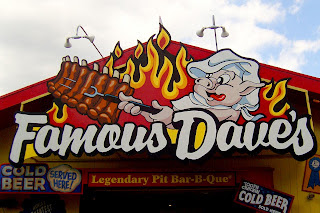 Moving through the throngs, I got a sense of being in a global village, all sorts of cultures represented now, not just the Scandinavian/German culture of my youthful attendance here. There were many exhibits: animals of all sorts, crafts, commercial and industrial, even a classic pitchman selling knives. I went to the Fine Arts exhibit, but found it wanting compared with the classic Midway Art, there's just something about a woman in her underwear with her head on backwards that really does it for me: 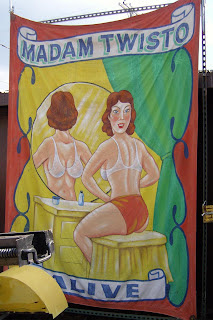 You can easily imagine the effect of an image such as this would have on my impressionable pre-adolescent mind. It was featured in an exhibit about the old fair attractions. There was a "torture chamber", an electric chair, pictures of staged head-on train crashes, pictures of unstaged stock car race crashes, chain-saw sculptures, exotic dance revues, prior grandstand attractions (Lawrence Welk twice!) all displayed in actual rail-cars used by the traveling shows as a home-away-from-home. There were pictures of some of the "Freaks" I remember seeing in my youth, including the Siamese twin boys and even one of the Viking Giant: 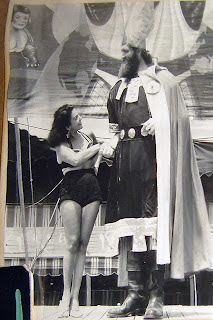 I'll be back with more from the Fair tomorrow...