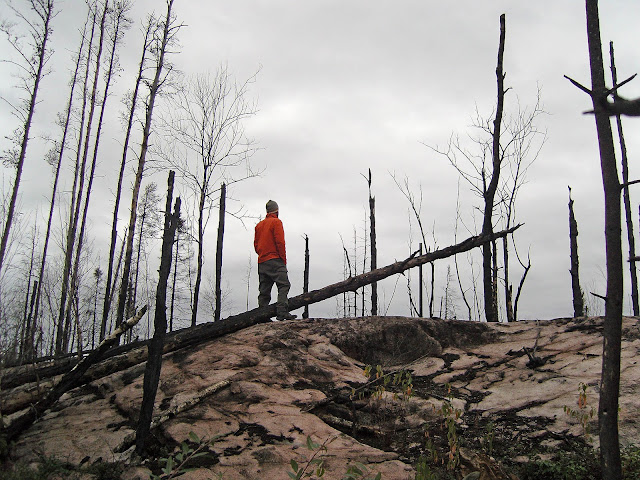 The wind was up but it had shifted, coming from the east now, a tailwind that would blow us out of the BWCAW in just a few hours. Saving the best for last we negotiated a portage nearly two-thirds of a mile in length with over 200 feet of elevation. An East wind usually portends bad weather and today would confirm that trend. We had just gotten the canoe on top of the car when it started to rain. It was only noon so we stopped and ate at the The Trail Center Cafe, which held the first people we had seen since Tuesday morning. Afterwards, we drove up to the end of the Gunflint where this summer's fires had raged. The usually hidden bedrock had been burned clean of its mossy coat; the pink granite surrounded with charred trees gave the scene a surreal look. But the plants had already started their return- millions of blueberry plants augur a bumper crop next summer, birch seedlings had grown a foot or more, and beneath them the jack pine seeds, freed from their cones by the heat of the fires, sprouting as well.

We headed back down the trail, to a soggy Grand Marais where we checked in at the Mangy Moose Motel (really!) and our wilderness experience was over.

What a trip! Nice photos.

I hope you treated yourselves to a lovely dinner at the "Angry Trout"
I was up there the first day of your trip, but I was working :(