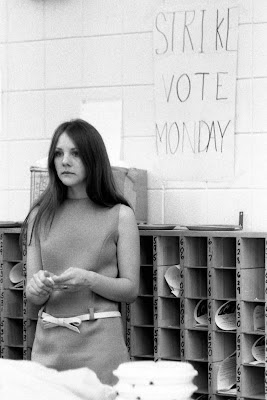 The shooting of four Kent State College students, and President Nixon's response ("They're a bunch of bums") in 1970 convulsed the country. Several universities shut down in response, the "strikes" as they were called lasted a few weeks, barricades were put up, large protest marches were staged and at first nothing changed. Classes resumed, Nixon expanded the war... and so it went. In a few years Nixon won re-election, in a few more he resigned in disgrace ("I am not a crook!")

In the smaller schools, the community colleges and high schools, this movement was sensed, but only a little. Children of suburbia, in the transition to adulthood, were taken aback by the events, not in the political sense, but in a social sense. They were nice kids, obeying the rules and trying to get ahead. Still, there were times when the world stopped, if only for a moment.

Tin soldiers and Nixon coming,
We're finally on our own.
This summer I hear the drumming,
Four dead in Ohio.

Gotta get down to it
Soldiers are cutting us down
Should have been done long ago.
What if you knew her
And found her dead on the ground
How can you run when you know?