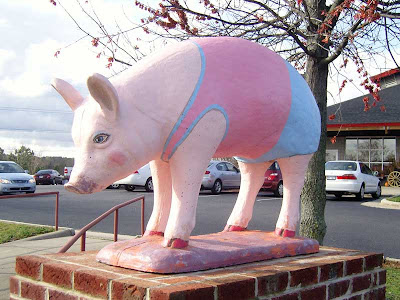 Back in Raleigh. This cute little fellow had greeted me earlier in the week with the somewhat deceptive offer of a "Streak O' Lean" for my Sunday breakfast. Think bacon, only grayer, hard enough to break a tooth on, and about as salty as a lick. Similar to "Fat Back" but with a "streak o' lean" running through it. Today's culinary adventure involved Big Ed's City Market Restaurant. This is a huge local favorite (see reviews in link), complete with a "Heroes of the Confederacy" exhibit, including weapons. I had the turkey and dressing(?) with sides of applesauce, biscuits, creamed potatoes and gravy. At least the applesauce wasn't greasy and salty. I'd be dead in a week if I ate this stuff every day. I don't want to knock this food, but man!- it was either pure starch, grease (lard), salt or some unholy combination of the three.