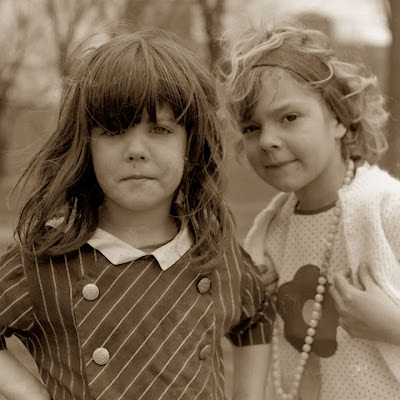 Loring park is Minneapolis' answer to New York City's Central park. Proportionally smaller, it still occupies several square blocks (including a pond) in downtown Minneapolis. In the late 60's it hadn't yet reached the pinnacle of its notoriety but even then it was a place best to be avoided after dark. There was the Salvation Army home for unwed mothers next to it, a funky "junior college" and many apartments around its perimeter. Its reputation as a gay cruising spot was (and is) completely warranted.
At the time there were kids who played there, kids on their own, doing kid stuff like using the swings, playing hopscotch, and like the girls above even doing a little dress-up role-playing. When we at the college used the park for impromptu photo sessions these kids would insist on getting in on the action.

The park has made a comeback since then, The Walker Art Center's Sculpture garden is connected to it and the once humble "JC" is now a mammoth community college- Loring has become a "Quad" to it. These girls are in their late 40's now, I wonder if they ever "play" in this park now?

I left the "big city" back in '84 for the Gunflint Trail. I've been back for some visits, but never knew Loring Park had changed that way. Always interesting to hear of the changes.