Gathering of the Ali'i 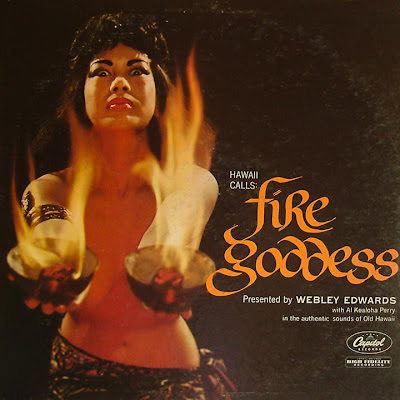 Webley Edwards produced the long running radio series Hawaii Calls as well as a series of recordings on Capitol Records in the fifties and sixties. These records were all themed around Hawaiian music, some more traditional than others. Many featured flamboyant covers, this music is often labeled "Exotica" by collectors.

For some unknown reason, the thrift stores I frequent have had a run of these lately. Most of the albums have a broad variety of "Hawaiian" music composed by professional writers. This album, with the most lurid cover of all, turned out to be a pleasant surprise:

A host of leading Hawaiian musicians, drummers, chanters and singers made these recordings... ...as a prelude to the Gathering of the Ali'i (the old nobility) to dedicate the meeting place on the site of one of the early homes of the former royal family. The sounds and the voices and harmony are exotic, and they are all truly authentic - from great Hawaiian artists, whose eyes misted or sparkled as they performed!

The music on this album, while sometimes tainted with modern influences, is about as close to the old styles as you are likely to find.

One of my favorites was Gabby Pahinui. He blended traditional and modern and even recorded some stuff with Ry Cooder about thirty years ago. Excellent music it was. I think his kids still carry on.

Thanks to Jon and Batty for the suggestions. I love Hawaiian music--I wish more and better were available on internet radio. If you have internet radio suggestions I'd love to hear them...Mountain Apple is all I listen to regularly. Looks like you scored, Batty, as that LP isn't available in CD. I wonder how some of the other "Hawaii Calls" recordings are? I think I will order some Gabby Pahinui.

Messed that up, let me try again:

Batty if you care to discover what I did wrong I'm willing to learn.

... I have some Don Ho LPs as well- modern pop arrangements, not nearly as rewarding.

Rose supplied me with this Hawaii Calls link to streaming internet broadcasts.

Listening to a little slack key guitar can send me off on a tropical vacation without ever leaving where I am.

P.S.
Thanks for the link Batty and Rose.

Oh wow, I just made a terrific discovery: Hawaiian Slack Key Guitar Masters Collection, Vol. 1, by Dancing Cat Records (various artists). It has a number of tracks by the Pahinui sons. I think my next purchase is going to be by Dennis Kamakahi.