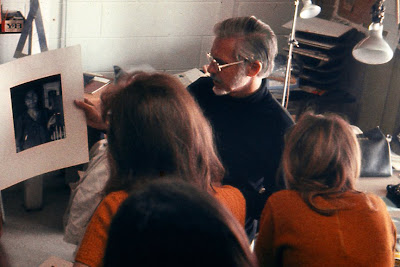 After last nights preview my thoughts returned to my days in school: taking photo classes (mostly independent study), experimenting (literally 'working in the dark') and being with perhaps the only person I consider my mentor- Frank Agar. My attention-deficit fueled scholastic career really only gelled in one place- as his lab assistant. His approach to his classes was refreshing, he had no apparent dogma to uphold, his open approach to everything photographic was a welcome alternative to my isolated, anomic existence.

In contrast, photos in last night's preview were fairly pedestrian, "safe" in subject matter and approach. But such is the legacy of the academic tradition. The digital revolution in photography was in evidence with various Photo-Shop enhanced prints, but still stuck in a 1930's to 1960's mindset. In contrast, painting, drawing and printmaking all had wildly divergent visions on display. One problem might be in the entrance categories- tradition printmaking (Intaglio, Lithography, and variations thereof) is well defined. Photography, since the advent of quality digital cameras and high-quality ink-jet printing, is still in flux and straining against its "purist" traditions.

Frank is gone now, but his open approach remains with me. There are exciting times ahead for those with an equally broad vision.

I find myself fighting back the tears just reading the kind words you have about Frank Agar.
I was a student of his for 3 sessions at Metro C. C. in the 70's. I still have the Metro paper that has a story and photo's of Frank. I don't have a masters in photography but who needs that when I can say I was a straight -A- student of Frank Agar and because Frank had a summer session with Ansel Adams, I can also say I'm a student of a student of Ansel Adams. (Time / Light Zones was a great lesson.) Frank's kind are few but I like to think that Frank Agar's spirit lives on in all the students he greatly inspired. I am one of them! How many teachers invite students to their home? Frank was a realist that could see true balance in composition. He suggested that instead of changing lenses other than a 50 mm, rather than caring around a bag full, to get closer or back away as long as your not backing up off a cliff..! Frank got the class to see the humor of someone taking photo after photo of Sun Sets..! Frank might just say.. "Are you sure that's not a sun rise? How about the difference between a "snap shot" and a "photograph..!" Frank... I can still here his voice... Peace..!
by: John C. Caruson, St. Paul, MN