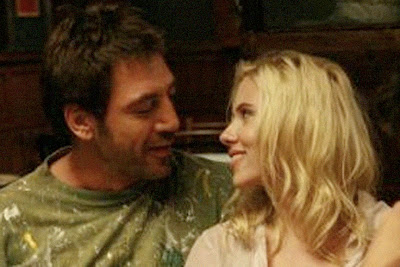 Woody Allen's latest film, Vicki, Cristina, Barcelona, is a romantic fantasy set in a golden-hued Spanish summer. This is a beautiful small film which is charming in its characters, setting, and story. Vicki (Rebecca Hall), and Cristina (Scarlett Johansson) are in Barcelona spending the summer with Vicki's relatives. They meet up with artist Juan Antonio (Javier Bardem), who is on the prowl after breaking up with the fiery Maria Elena (Penelope Cruz.) By summer's end all of their lives have become intertwined in sometimes surprising ways.

This is not a movie with a great dramatic arc. Instead it is a study of interpersonal relationships and the appeal and shortcomings of romantic love. What a study! With its subtle and witty dialog spoken by some of the most beautiful people on the planet, it is a voyeur's dream; its fluid sexual choreography fulfills any escapist desires the viewer may have. Woody, in his 71st year, has given us one of his most knowing and affectionate looks at human desires.

That this film ultimately ends with all the characters back to where they more or less started gives it a melancholy, if realistic conclusion. Highly recommended.

Hi there Prof. Batty, friend of Sharon's, and fellow Bjork fan here. Read something on Bjork's site that I thought you'd get a kick out of titled 'Time To Put It Right'

... Hi M.M.! Fascinating stuff. I've seen both Nico Muhly and Valgeir Sigurdsson perform at IcelandAirwaves, they are both IMMENSE talents, but as Björk states in her post: "just read the credits!"

They have a very cool music scene in Iceland, I think it is really beyond the understanding of many snarky music writers...

Björk is in a class of one.