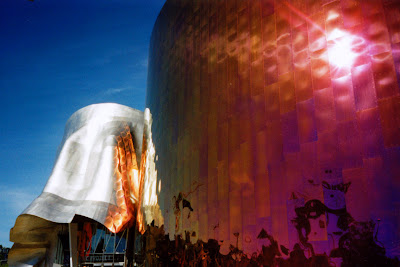 Frank Gerhy's Experience Music Project building in Seattle must be seen to be believed. His other notable, late period works (including the Weisman museum in Minneapolis and the Guggenheim Bilbao) share a sense of whimsy, seeming to defy logic and gravity in the wild interplay of their curvilinear surfaces. They have been criticized for overwhelming their functionality, but nevertheless remain glorious in their defiance of the "traditional modern" which has been imposed upon most institutional building of the last sixty years.

The museum it contains, devoted to modern popular music, has just enough unique displays to make it worth the time of anyone with the slightest interest in the history of music of the last sixty years. A fantastic guitar collection, the full stage set-up of the Jimi Hendrix experience, and rotating exhibits of rock curios- when I was last there I managed to see Buddy Holly's "death glasses", Ringo's Beatle suit, and the "Stonehenge" sculpture from This is Spinal Tap, all in one room!

I'll have to put that on the list of "must see" in Seattle. I love vintage guitars, just can't afford 'em.

... yes, yes, just unbelievable stuff: prototypes, custom builds, vintage videos of performers using some of the instruments in the collection, the audio guide has modern recordings of some the instruments as well.