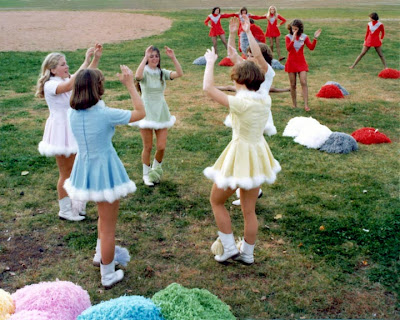 Fall brings the football season, with all of its associated pomp and ceremony. Cheerleading evidently began in 1898 when University of Minnesota student Johnny Campbell stood in front of the crowd, and directed them in a chant. Soon after that, the University of Minnesota organized a 'yell leader' squad of 4 male students. Up until the 1920’s cheerleading was male dominated, but eventually more women began participating due to limited availability of female collegiate sports. In the nineteen-fifties keen competition for limited cheerleading positions gave an impetus to the formation of additional groups of flag wavers, who would appear with the marching band. In the sixties, small groups of "elite" "danceline" marchers appeared, with such monikers as "the Front Five" and, in the case of my alma mater, "The Pastel Pats" (both groups pictured above.)

While their contribution to school spirit and athletic success may be debatable, their presence certainly brightened many an otherwise dreary autumn afternoon. In the nineteen-seventies, landmark legislation ("Title IX") gave girls equal opportunity for athletics, but these "pep squads" have remained popular.

Wow. Never in a million years would I expect to see a Pastel Pat photo in a blog. What a contrast between PHHS then and now. Thanks for the great memories...I married a Pastel Pat!