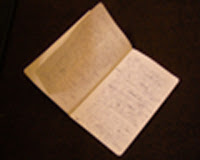 It was if she had just floated in from the night mist which hung over the lake. She was a writer.

The band I was working with had been booked for a weekend at a club in Cross Lake, Minnesota. The pay was OK, and we got the use of a cabin that was right next to "Swede's Oar House." Not exactly the Riviera. After performing most of us would relax in that shack with a sip or two of whiskey to take the edge off. She was French and claimed to work for a European music magazine. Petey had evidently invited her to come up; his interests weren't exactly literary.

We started in with some stories, Jimmy would play an tune on his Martin and I strummed along on old zither with one separate single string that was set up to be used with a steel, in the fashion of a Dobro. As we played she wrote and wrote (in French) in her little black Moleskine. After a while it was as if she wasn't there. After a further while I noticed that she really wasn't there, neither was Petey. We played again the next night but she didn't return.

As the years went by I would occasionally hear people talk about her: she was living in a houseboat on the Mississippi River down by the Bohemian Flats across from the University, she was seeing so-and-so, various stories with no real point. I never did hear of her actually publishing anything. The houseboat "community" on the Mississippi was an insular and intimidating group.

The very last I thing I read about her was an oblique obituary in one of the local music papers. A veteran performer and noted writer in his own right wrote a paragraph about the "writer from Paris", who somehow landed in the middle of the Midwestern prairie, burned brightly and then had her light extinguished, she was one of the earliest AIDS casualties.


They said that Louise was not half-bad
It was written on the walls and window shades
And though she'd act the little girl
A deceiver, don't believe her, that's her trade

Sometimes a bottle of perfume,
Flowers and maybe some lace
Men brought Louise 10-cent trinkets
Their intentions were easily traced

And the wind is blowin' cold tonight
So goodnight, Louise, goodnight.