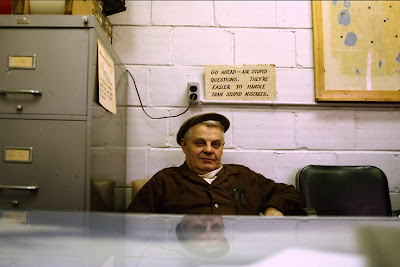 I've only had one job where I worked only with men, it was as a clerk in the Minneapolis Fire Department's main supply depot, simply called "Stores." I was young and carefree, with few strings and fewer cares, I got the job as a promotion from a truly ghastly job in the Police Department's evidence division. I had to stock and distribute supplies to all the stations in the city. When not out in my little red van, I would spend time in the main storehouse, filling air and oxygen bottles, marking hoses and performing other simple duties.

Most of my co-workers were in their fifties, guys who had been hired by the city just after World War II and were all within a few years of retirement. There were four of us who actually worked in Stores, augmented by a rotating cast of regulars who would drop in from the city garage (which was in the same complex.) After about six months the stories started to repeat, there was not a lot of potential there for personal growth. Still, some of the characters were entertaining, none more so than Karl, the legally blind custodian. Karl would make the rounds, emptying the trash, putting it into his little compacting dump truck and then driving(!) to the main City recycling station. I even went with him once, a truly scary experience.

Karl always made it a point to eat his lunch (a jar of pickled pigs feet) in our office, tell a story or two about his lurid past, then fall asleep for a half hour or so. He had been in the Merchant Marine during the war, dodging U-Boats and always making a "little on the side" in every port, trading nylons and cigarettes for anything of value he could sell back in the States. He said that on the day the war ended he sat down on his bunk and cried. His "tales of burning love" were especially outrageous (and unprintable), but the story of his ruinous divorce was less so.

One day Karl wasn't there. His eyesight, ravaged by diabetes, finally failed him completely. He managed to call his ex-wife, who graciously saw to it that he was taken care of. I left Stores soon after, I had gotten married and was itching to leave civil service for the glamorous Rock 'n' Roll lifestyle.

If I had stayed at Stores I would be retired now.

But I would have died many years earlier.

Even so, this makes a lovely story.

I am thinking many of us had jobs like that back then. Mine was in stores at duPont company. It was just a summer job, but we had some similar characters from a similar time. You made me remember one I was quite fond of.

nicole- the feeling is mutual.