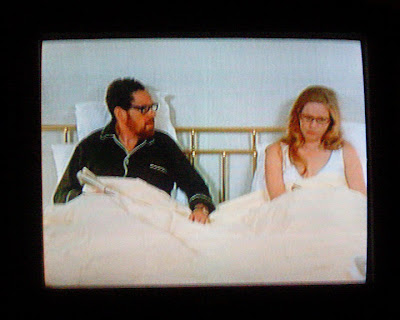 Ingmar Bergman's Scenes From A Marriage was a Swedish television miniseries which first aired in 1973. Public TV in the US finally aired it in the late seventies, to considerable controversy. Not really a "reality show", this scripted look at a troubled marriage was, and remains, dynamite. All of the problems that beset almost every marriage (or committed relationship) are examined here. The two leads, Liv Ullmann and Erland Josephson, are so brilliant and Sven Nyquist's cinematography is so understated that one soon forgets the fact that it is a staged production. Our circle of friends had many couples that watched this together. Even in our relative immaturity, it was easy to grasp the fact that it contained valuable lessons. Some couples couldn't make it all the way through the six one hour episodes.

Revisiting it now, in a 2004 Criterion Collection re-release, the ideas which underlie the dialog are just as relevant, and although it is quite bleak at times, it remains ultimately hopeful- in much the same way of most good relationships. They don't always work out, but most of them do, (which I find quite remarkable) and quite often the second or even third or fourth ones succeed as well or better.

One thing that becomes more more obvious on my re-viewing is the uneasy sense of voyeurism the series elicits. Looking at this couple is like peering in some stranger's window. And then the window becomes a mirror.

Yes, I would like to see it again.
Ullman and Bergman's daughter Linn is a fine novelist, worth reading.

My mother hates his films and I am too coloured by her opinion to reflect upon the subject...

I love the last two lines of your review.

Mary~ I've been meaning to read her.

K~ With the exception of Fanny and Alexander it seems that they all require a bit of masochism on the part of the audience. I consider The Virgin Spring and Persona to be my favorites.

Rose~ Thanks, those lines just "appeared" on my laptop, I love it when that happens.