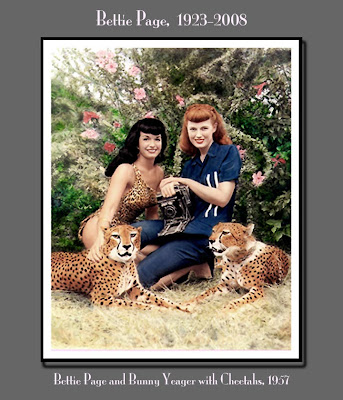 Growing up in the confused and repressive fifties, my impressions of femininity and sexuality were shaped by television (where married couples slept in separate beds!) and magazines such as Life, Good Housekeeping, McCalls, Popular Mechanics and Mad, none of which gave much realistic information on the subject. There were other influences which were "under the radar", so to speak: Girlie magazines, "Naturist" publications and pulp fiction titles, all of which crudely attempted to exploit the hedonistic side of life (note: links below may be NSFW.)

In the middle of this post-war scene strode Bettie Page, unashamed and stunning, with her now iconic hair-do and look (often copied, never equaled) who would cause a minor revolution in sexuality over the next five decades. The issues surrounding the portrayal of female anatomy and its exploitation are older than history, probably as old as humanity itself.

Betty choose this mode of expression over "typing for eight hours a day" and made the most of it. It is odd which iconic motifs stand the test of time- religions develop and perpetuate them, industry and commerce spend a great deal of money and effort to instill them into the public consciousness, but the idea of "Bettie Page" as a cultural and sexual icon grew almost on its own, supported almost entirely by her fan base. Betty suffered with bouts of mental illness in her later years, but she did recover enough to be able to appreciate the tremendous growth of interest in her in the last twenty years.

This article, written by her biographer, gives a more concise overview of Bettie's life and its import. There is also an interview with Mary Harron who directed the 2005 biopic The Notorious Bettie Page.

To catch a glimpse of Bettie (Betty) herself, this video link shows her in all her naughty/nice glory, dancing for her favorite audience, the camera.