... more from the Valentine's Day excursion... 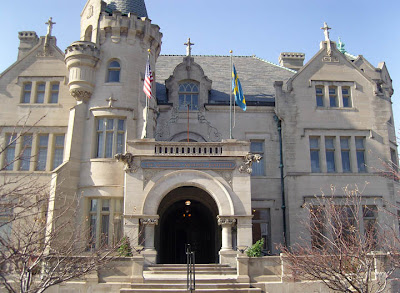 Pictured above is The American Swedish Institute- a historic house, museum, and cultural center located near downtown Minneapolis. Swedish immigrant newspaperman Swan J. Turnblad founded the Institute in 1929, this was his residence before then. We were there to catch an exhibit of Bohus knitting and design. The Bohus movement was active in Sweden from the late thirties until the late sixties. Its aim was to empower women, its method was aesthetic knitting: 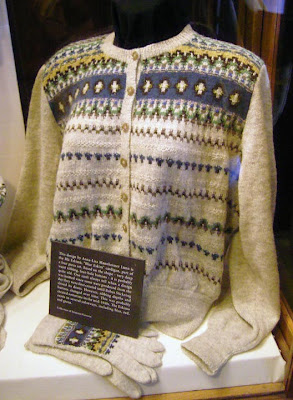 I'm not a knitter, but I was duly impressed. Personal stories, pictures of famous women in Bohus knits (love the "Mists"), and a wide variety of vintage outfits made with a soft wool/angora mix and colored with natural dyes made for a most pleasant exhibit. In one room a video history of the movement was playing. It had interviews with some of the surviving women, along with a disturbing story.

During World War II, the main Bohus building sheltered Jewish refugees from Nazi Germany, much to the displeasure of Swedish Nazis. Scenes of demonstrations, clippings of anti-Jewish propaganda, and a flag with a yellow swastika on a blue field brought home the fact that Swedish neutrality was not monolithic. The Swedish Nazi party remains a force in Swedish politics to this day. It seems that my maternal ancestry had a darker side.

The rest of the institute consists of the individual rooms of the mansion, with its the original decorations and furnishings, and a colossal stained glass window depicting the looting of Gotland by a Swedish King. In the third floor ballroom, displays of Swedish heritage in the Minneapolis area included a tribute to "Snoose Boulevard" and Dania Hall, a gathering point for many Swedish immigrants. Much of the action in Ole Rolvaag's novel Længselens Baat - The Boat of Longing (1921) took place in that area. My old neighborhood was also one of the "Swedetowns." When I was a child I can recall visiting the local shoe repairman who spoke only limited English- "Ya I fix."- was his usual end to any conversation.