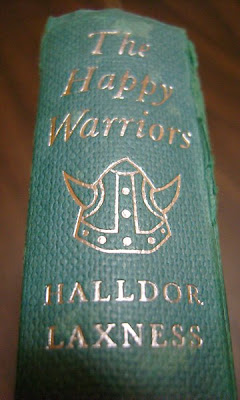 "You are strange men in Iceland, who will not submit to a king, but rely only upon yourselves, which is without parallel in the world."

Historical fiction, if it is to succeed in transporting the reader to a distant era, must impart a sense of verisimilitude in the events it depicts. Even more difficult is the re-creation of the literary style of a past era. The crowning achievement is, of course, the creation of a truly great novel. The Happy Warriors, by the great Icelandic novelist Halldór Laxness, succeeds on all three counts.

First published in Icelandic as Gerpla in 1952, The Happy Warriors is written in a strict Saga style. It is the story of two "oath-brothers", Thorgeir Havarsson and Thormod Coalbrowsskald, and their quest to re-create the glory of the warriors of old. In the changing world of 11th century Europe they are both out of date and in over their heads, for the majesty and power of the old pagan ways has been supplanted by the strange cult of Josa mac Dé: Christianity. After a few Icelandic misadventures they split up, Thormod the poet becomes distracted by woman's wiles and domesticity while Thorgeir, the would-be heroic champion, ends up in England and France, in the service of Olaf the Stout (later to become King/Saint Olaf.) Disenchanted with the European ways of warfare, Thorgeir returns to Iceland and meets an ignoble end. After much brooding, Thormod leaves his wife and children to undertake a quest of vengeance for the death of Thorgeir. Traveling to the far northern reaches of Greenland, living with the Inuits and enduring much suffering and hardship, he fails in his mission. Crippled and bitter, Thormod makes it back to Iceland and then, finally, to Norway. He meets Olaf on the eve of the Battle of Stiklestad. Thormod finally comes to the realization that his dreams of heroism and glory have led to only death and destruction.

This is a book full of strange and terrible things, sprinkled with archaic words and obscure references. A familiarity with the Sagas and that era (c.1000-1030) would be a definite aid in comprehension (as would some annotation!) While I feel certain that the stylized language in the book must be absolutely brilliant in the original Icelandic, Laxness' literary mastery still manages to come through in the English translation. The language is powerful and direct, its archaic aspect only adding to the story. In a departure from the Sagas, Laxness introduces some social criticism, starting subtly and building steadily. By the final scene, which culminates in a moving climax, Laxness' message is felt all the stronger for its prior restraint.

After comparing this to the other Laxness novels available in English, I am glad that I read this book last; I wouldn't have appreciated it nearly as much without reading the others. Anyone interested in the spread of Christianity in Northern Europe during this time will find a wealth of material here, played out in front of a vivid backdrop of actual historical events.

Special thanks to Rose for her help in steering me to a library copy of this rare book.

Her review is here.

For a different view, go here.

Love your intro., love your review!
How is your personal Laxness ranking looking these days?
Now you have read all the English translations...let's hope that changes soon.

Ha. You already updated your ranking!

I'll have to go back and read the sagas again. I was a student at St. Olaf the last time I read them and that was several decades ago. Thanks for the gentle pressure to do so.

And now all you've got to do is read them in the original, n'est ce pas?

Rose~ thanks, and I heart yours as well. I fear this title won't be featured on Oprah's Book Club, maybe too many decapitations. Oh, and FYI, St.Olaf college is the ne plus ultra of Norwegian-ancestry-higher education in Minnesota.

Jon~ were the sagas course reading, or the entire course?

K~ half a loaf (English translation) is better than none. You'd better watch it, or I'll subscribe to Ordabok.Is and then read all of Hallveig, Herdis, Kristín and Krummi's comments!

Isn't one of the things St. Olaf college is known for its music program?

Aspie mum:Jeg forstår bare litt Norsk, men ikke Islandsk.
Batty: I vaguely remember that it was most of that lit course. I remember some Ibsen, Undseth, Hamsun, etc. I need to re-read everything again with a new perspective.
Rose: Music there is awesome. I'm just a duffer guitar player, though.