Losing My Religion - North Side Story 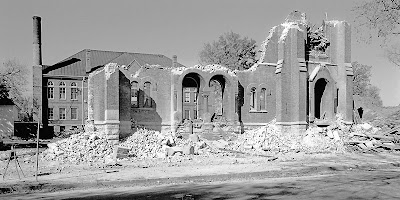 In the early seventies, I lived in a run-down area of Minneapolis. It was on the fringe of downtown; in its heyday (the 1890's) it had been where industrial workers and teamsters would live with their families. There was money there then. Saint Joseph's, a large Romanesque-style church, had been built along with an adjoining school, convent house and rectory. It was a point of pride for its parishioners and social center for the neighborhood. Its magnificent twin steeples were landmarks, visible for miles. Bit by bit, the church began to fade. Urban development, changing demographics, and the forces of nature all played a part in its demise. A windstorm blew down the steeples, the children grew up moved out to the suburbs, and large areas of homes were demolished, the land converted to industrial use or just left empty where a freeway was scheduled to be constructed.

The church was to have been spared, but it was finally demolished while a legal appeal to save it was in the works, torn down to make any point of saving moot. I still have a bench made from one of its pews; the church was torn down so quickly that most of the rest of them were crushed and ended up in a landfill. The congregation moved to an outer suburb. A freeway exit ramp occupies its former location.

There are still a couple of occupied houses and a old brick apartment building in the area. All the rest are gone and, excepting the occasional memorial, effectively erased from the history of Minneapolis.