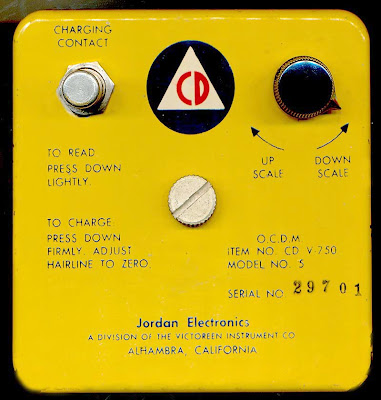 When I was young the letters CD denoted Civil Defense. Left over from World War II, the threat of nuclear annihilation gave the Civil Defense program a new life. We had the now infamous "duck and cover" drills in school, where we would cower under our desks, or stick our heads in our lockers. This was a nationwide system, with CD shelters in big cities and schools stocked with food, water and medical supplies stored in steel barrels. There was also a Geiger counter and other equipment for measuring radiation (as pictured.) I guess the idea was that survivors of the blast would congregate in these shelters until the radiation dropped down to a reasonable level.

When I was about seven, the CD system administrators thought that there should be a drill where all students would be let out of school early, to then make their way home as quickly as possible, (we all walked to school- there were no buses then) we would fill out a form with our time and return it the next day. The results would presumably give them information concerning our "readiness" in the face of an attack. Or something.

The day of the big drill happened to be on the day that I usually had choir practice at our church. To my young, somewhat unformed mind, this presented a dilemma. I knew from the past that I should never, ever, miss choir practice. Jesus wanted me for a sunbeam. If there was an attack, I thought that Jesus' house would be able to protect me far better than my house or school could. Also, the church was neared to school, I'd have less chance to be hit when I was in the open on the way home. I found an unlocked door in the church and went to my usual place in the choir stall. Just to be safe, I ducked down and covered my head.

The church secretary must have heard me come in, she came in and found me and scolded me, then told me to go home. When I got home, my mother was mad: "You were supposed to come straight home! Now you've ruined the test."

But I didn't die that day. Jesus saved me.

A fellow choir member! Lutheran? Bill Holm and Minnesota made me guess that...
So do you still sing, Batty? In the car, at least?

Everyone sings in the car in Minnesota. That's where they pick their noses, too. No one can see them.
Oh yes, all Minnesotans are Lutheran, even if they were brought up as something else.

Jon, the boys and I made a game for the traveling nose pickin. It's called "Eat or Flick." Yeah I probley should not encourage gambling.

Rose~ yep, you got me. I sing in the morning when I get up, it drives the Weaver crazy!