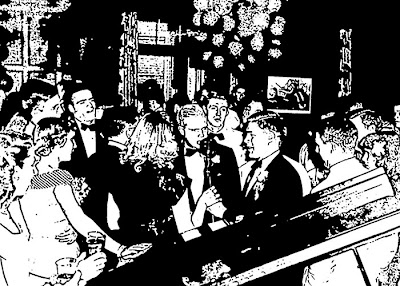 Let me tell you about the very rich. They are different from you and me. They possess and enjoy early, and it does something to them, makes them soft where we are hard, and cynical where we are trustful, in a way that, unless you were born rich, it is very difficult to understand.

It was a routine scan job. Bigger than most, but not the biggest I'd ever done. When you got down to the nitty-gritty of it, I was a glorified xerox operator, converting old photos into 1's and 0's, then putting them on shiny discs of aluminized plastic.

I had settled into a pleasant, if not exactly stellar, career peering into other peoples' lives. The best part of the job was that every day there was something different: new wrinkles on family dynamics, history as told by a folding Kodak, a moldering pile of images and clippings, frozen moments in time, glaciers of images.

That particular morning I had worked most of the way into a large photo album. There were over one hundred pages of nearly a thousand snapshots pasted on rough black paper, dating from the turn of the 20th century until the early nineteen- fifties. One of the girls I had been watching grow up in the album was having her debutante ball in the old Lafayette Club. One photo in particular caught my eye. In it a group of young men in tuxes were standing around a microphone; in the center of the group was The Golden Boy.

The Golden Boy was as close to a sure thing as could be found on the prairies of Minnesota. With a family history in banking, The Golden Boy would grow up to create his own fame and wealth: in investments, in pro sports, in politics. His blood was a bit too blue for farmers and laborers to actually rally around him, but his real power in the political sphere was nonetheless as strong as if he had actually been elected. Buildings with his name would grace many colleges in the state; he was not stingy with his success.

But all that would come later. This night, the night of the photo, he was letting loose and singing with the abandon of youth. A leader even then, his well-oiled blond hair glowed as if afire, The Golden Boy in his greatest glory.

Who was he, Batty? Or can you not divulge?