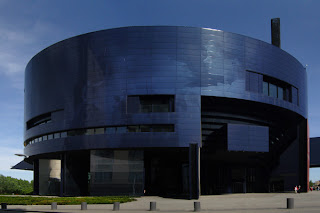 For the second Sunday in a row I've found myself attending a musical production. This time it was Caroline, or Change, book and lyrics by Tony Kushner, music by Jeanine Tesori. The venue was the big blue Guthrie theater in downtown Minneapolis. This is a different type of musical, with "through-composed" music- continuous and non-repeating, but with leitmotifs for different characters. Caroline is a maid working in the Gellman household in late 1963; the story concerns itself with social injustices set against a background of the changes happening during those momentous times. 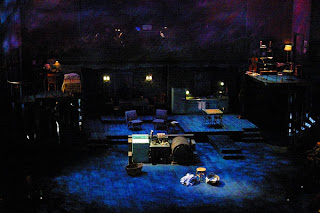 Heavy theatrical fare, to be sure, and when smothered in dysfunction and guilt, it became excruciating. Every once in a while I come up against some form of performing art that catches me by surprise, but in a bad way. Usually, when presented with a new production, whether it is a book or film or piece of music, I try to "wrap my head around it", to try to see where it's coming from or going to, or sometimes I'll just surrender to the whole experience, letting it wash over me. For a musical, it was surprisingly stodgy, with little real choreography. The instrumental music was performed well, however, and there was always a perfect sound balance between the orchestra and the singers.

This musical, and this production in particular, has been so highly praised that afterward I did some research on the internet, trying to make some sense of my reaction. There were clues, here and there, "wordy" was the pejorative most used by Kushner's detractors. Another criticism which came up more than once was the role of the 8 year old Noah, who is, in effect, the male lead opposite Caroline. Making him a central character unbalanced the whole affair. Even cute kids have their limits, having to listen to one sing several tuneless art-songs tested mine. None of the characters had any redemptive qualities- I'm sure that that was the author's intent- they were filled with bitterness, hatred and self-loathing (another of Kushner's themes), so I suppose I shouldn't have been surprised when I left the theater infected with the sourness of the whole concept, a change in me that lingered the whole day.

My "feel-bad" musical experience of the year.

Ish! I hope you didn't shell out too much for the privilege of being there.

Jon ~ Nah, I got rush tickets. I didn't have the highest hopes going in, but this was much worse than I had expected- they should have had a warning label "Caution: contains unrelieved whining and graphic portrayals of neurotic behavior." After reading about Kushner's other plays, I found out that this type of "entertainment" Kushner's modus operandi.

My "Schadenfreude" sensor must be broken.