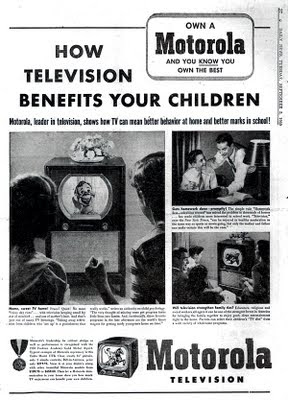 After Radio's heyday, Television became the dominant force in "instant" media. One of my earliest memories is of the day the TV came home. It must have been about 1953 or 1954, it was truly a magic box. The picture was small, its reception was erratic, but it presented me with views of a greater world beyond my block. Its personalities became my friends, its dramas became my dreams. There was a surprising amount of quality programming then: variety shows had the pick of vaudeville comics, recording artists and Broadway actors. Alfred Hitchcock presented his little 20 minute morality plays, Rod Serling pushed the boundaries of the medium with his Twilight Zone, and big-budget plays were sponsored by Hallmark and Kraft.

The sixties ushered the widespread use of color TV. I remember spending a lot of time in the Sears department store's TV showroom. Color TV wasn't very good then, and it was mostly just white men in suits anyway- although as the decade wore on, the use of color became more prevalent (excessive?) with pop-art, flower power and the Vietnam war, brought to every home in living color. It was the era of the sit-coms (I'll never get those hours which I spent watching The Beverly Hillbillies back again!)

After I moved out on my own in the seventies, I lost the TV habit, and it wasn't until the late eighties before I actually got a "proper" modern color set. Evidently, I didn't miss much.

Now the rise of internet video has become a threat to, and has even supplanted TV for some applications. Like radio, TV won't go away, but will get a smaller and smaller share of the overall media market.