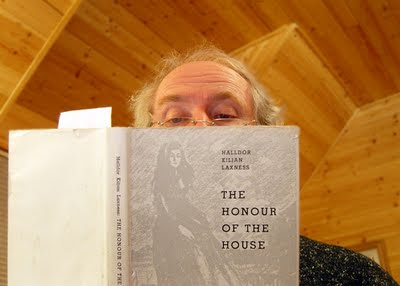 The Honour of the House

A Story by Halldór Laxness.

I brought home more than happy memories from my recent Iceland trip, and of all the things I did bring home, this slim volume was perhaps the most delightful and certainly the most unexpected discovery. It was first published in 1932 in a collection of stories (Fótatak manna) and was published in English by Helgafell in 1959. This a story of two sisters in a fishing town in Iceland, taking place over a span of years in the early part of the twentieth century.

This is a book whose form is shaped by a third-person omniscient narrative. As supplied by Laxness it is full of gossip and observations of small town life, sometimes quite funny, sometimes a bit misleading, but very effective in conveying a story of ordinary people whose lives seemed shaped by forces beyond their control. It is also a very sad story, a story of almost unbelievable familial cruelty, yet each turn of the plot somehow rings true. This isn't a morality play, for the very unusual ending ties it to ancient Icelandic beliefs rather than Christian principles. I read somewhere (sorry about losing the link) that Halldór was inspired by several true stories he had heard of- events which had occurred in his community's past, and indeed; this story has the feel of an oral history. While I read, I could almost hear my Swedish grandmother's voice as she used to gossip at the kitchen table- gossip is similar everywhere, and I suspect that the stylistic manner in which these stories are told is similar throughout the Nordic countries.

There was a movie made from the story by Guðný Halldórsdóttir in 1999 which was submitted for Academy Award consideration. The synopsis of that film seems to give the story a different dynamic in that the sisters' mother becomes the narrator.

While not a grand work of literature, it is a very well constructed story; those who have had issues in the past with Halldór's politics may find this kind of writing more palatable. Those interested in the dynamics of small town life should find it irresistible.

This is the third consecutive year that my Laxness blog-pal Rose and I have commemorated the date in 1955 when Halldór gave his memorable speech at the Nobel Prize banquet. Her review is here.