In My Grandparents' Room 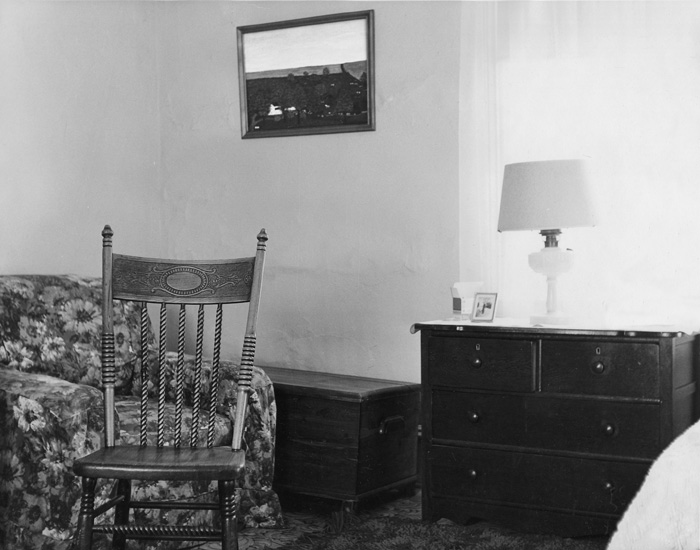 Up until the early '70s my maternal grandparents lived in a small farm house in central Minnesota. It was always a treat for us kids to visit, maybe not so much of a treat for my grandfather. The house's main floor had a kitchen and a "cold parlor", a room used only during the summer, but kept unheated the rest of the year. There were two small bedrooms upstairs, these were only used when the grandchildren would spend the night, they also were not heated in the colder months.

There was one other room, a room which adjoined the kitchen, a room which was a combined living/bed room. A oil heater, a bed, a few dressers, a chest and a couple of chairs were its furnishings. My grandparents lived a simple life, in a spartan aesthetic which comes with near-poverty. Grandfather read his paper and his Zane Grey novels in his rocking chair in this room. If the weather was bad and the kids couldn't be outside, they would play cards on the bed, while the grown-ups and our grandparent's neighbors would gossip in the kitchen. Sometimes, if the gossip was something the children shouldn't hear, they spoke in Swedish.

Do you have the painting in the photo?

No, I think it was only a magazine reproduction. She had Saturday Evening Post covers from the Fifties on the walls of her outhouse.

Much better taste than the playboy centerfolds that wall-papered every inch of the "back" bathroom of the plant at my Dad's/Grandad's business ...
Quite widened my eyes when I was seven years old or so.

Stealing this picture - thanks - a flood of memories!