It had been a blue collar bar for years- serving workers from nearby factories and businesses. The factories were pretty much gone, condos and lofts had been rehabbed in many of them, with young professionals giving the area a greater resident population than it ever had. This bar had changed too, the old "ACE BAR" neon sign which once lit up the corner had been moved inside- the burned out "C" and "E" gave it a cool, minimalist vibe. The place was now called "The Dubliner." The interior hadn't really been remodeled, they just decorated it with Irish posters and banners.

There was a lively band playing Saturday night, lots of Van Morrison and Dylan (no U2, however.) There was a good selection of beer with a popcorn machine supplying the only food. Electronic darts and video games were the only other amusements. Not exactly a pub (no booths, either) but close enough.

But there was a good feeling in the place. The regulars were an attractive mix of people, conversations were animated, but not threatening. I couldn't quite put my finger on it, why was this experience so much better than most other bars of this ilk?

Then it dawned on me: Kennedy.

Pictures of JFK (and Bobby too) were everywhere. Most of the people in the bar hadn't been born when he was alive, but I got a sense of JFK blessing this gathering (which was hardly Irish, but was certainly American.) This vision of Camelot still remains a sub-conscious ideal for many people, and in an old, dingy bar in St. Paul it surfaced anew. 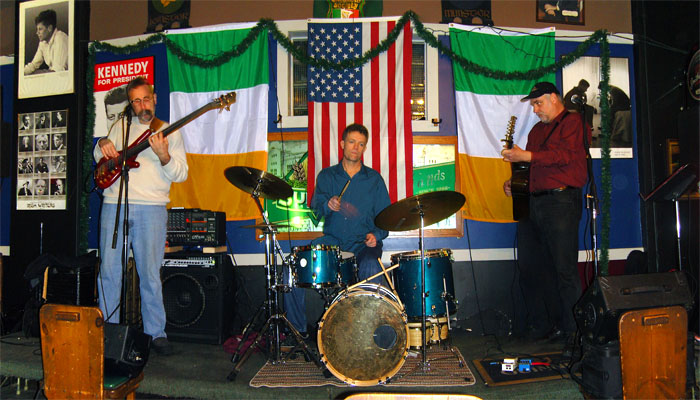 My husband likes to think I have a thing for the Irish...I really do.

My goodness, but you certainly have international tastes!

A Bar. Love the cool picture.

In Virginia, a bar can't just sell popcorn. In our progressive state, all bars must be "restaurants" as well. Crazy.

The popcorn was "gratis", there is a restaurant next door, but it is closed at night.