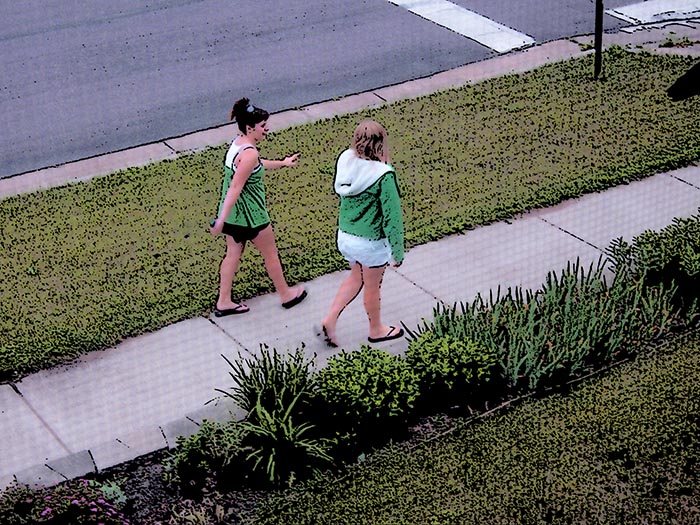 The neighborhood is swarming with adolescents. Living on a corner lot which is situated at sort of a cross-roads for the sidewalks in this part of town, there is a never ending stream of kids on it who are old enough to be on their own, but are still too young go out in cars. The girls are usually in groups of two or three, while the boys generally have a "posse" of five or six.

There is one boy who is more of a loner- I'll call him "Skaterdater." With his long hair, baggy pants, backwards baseball cap and skateboard, he would be similar to numerous other boys his age were it not for his public displays of affection. No girl is safe, it seems, from this juvenile Casanova's charms. He is only about 5 feet tall and some of the girls have a good five inches on him. He must have "it", because the girls usually initiate the kissing- in broad daylight! Tsk, tsk! In my day we saved that kind of activity for basements or between garages (or in the cloak room at church functions- but that is a story for another post.)

File under: Hell in a hand basket

File under: Some things never change

It's the long hair, girls like that emo stuff.

That happens in Chile too, kids making out in public is very common. I remember I was making out with a boy once when I was in the FIRST GRADE!!! My mom caught us, pulled me all the way home by the ear. I have to say I would do the same to my daughter.

I was a "kisser" as well, until the second grade, anyway!