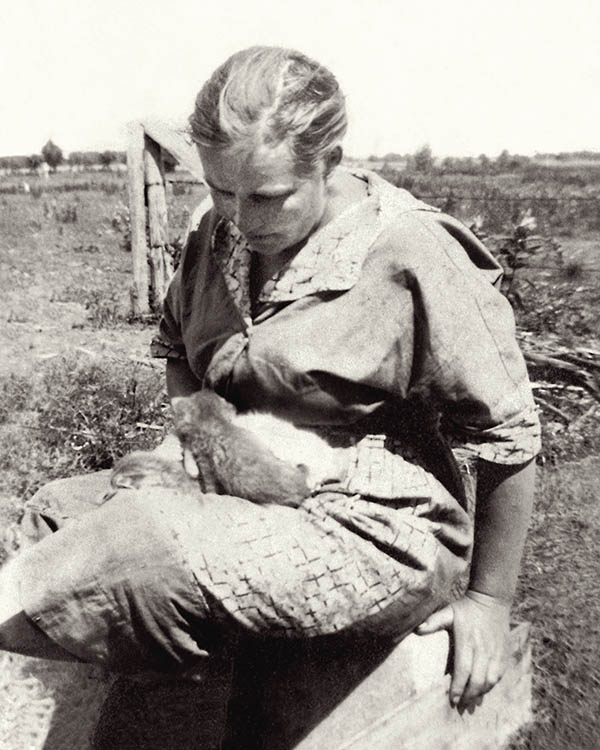 The original print was actually in pretty good condition. It wasn't the best picture- it had been taken with a cheap camera and had been printed a little on the contrasty side. Cleaned up some dust and black speckles then took out a couple of scratches- it started looking better. Reduced the deep shadow on her face and deepened the density and texture of her dress. Straightening the horizon helped, as did taking out the stains and finally giving the whole image a slight color.

It was then when I really looked at the picture.

A woman in a house-dress, sitting outdoors with a lap full of kittens, in her mid thirties, possibly of Germanic or Nordic descent. She is looking down; only a sense of her countenance is possible without a clear view of her eyes. But her hand is clear- it is hardly dainty, but still supple. I've worked on many images similar to this one, but this one was different.

There's a quarter of my DNA sitting there. She was my father's mother, who died young when my father was still a child. I look for traces of myself in her, but I am more my Mother's child than my father's. Her hand is the same as my father's, though, and her build has "blessed" many of her descendants. There are only a few pictures of her in existence and this is the only one of her in a full-body pose. I'll probably never get any closer to her than this snapshot; the only child of hers who is still alive, an elderly aunt, was an infant when her mother passed away and has no memory of her whatsoever. My father spoke kindly of his mother, but he seldom spoke of the trauma of losing her and the troubles which the family went through afterward.

Nice blog. I found myself in a similar frame of thought when I stumbled upon this link: http://www.boston.com/bigpicture/2010/08/russia_in_color_a_century_ago.html It's amazing what color can do to a photograph. Not that black and white photos are at all bad, mind you. Perhaps there wasn't a restoration, in a physical sense, for these photographs. But as I viewed them, I felt as if there was some sort of restoration going on. Or maybe I'm just trying to add some relevance to this comment. At any rate, maybe you haven't seen these pictures yet.

Those Russian pictures are excellent- the three negative method really preserves an astonishing amount of detail.

Right, those are the words I was looking for. Glad you enjoyed them!

Niranjana ~ What I know of it is very, very sad.

Wonderful that a woman who worked hard and probably knew hard times (or so it looks to me) taking a break and a bit of fun with the kittens. Nice.

She had already given birth to eight children, two of whom died, she would have two more before she died at 43.

My hands look just like hers. Stealing this ... thanks!