The Secret History of the North 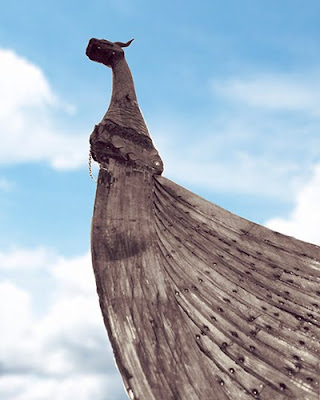 An article in The Guardian posits that a Amerindian woman was taken to Iceland in the 11th century. Based on DNA research, there are an estimated 80 living descendants in Iceland today. As recently as 1960, before the discovery of an Norse settlement at L'Anse aux Meadows, any pre-Columbian contact between Europeans and North Americans was discounted in academic circles. Current research gives evidence of many Viking-era settlements in Greenland, along with contemporary accounts given by Guðríðr Þorbjarnardóttir and chronicles from the sagas. Numerous Viking era artifacts have turned up in Inuit villages. The list of discoveries grows longer and longer as the years go by.

Why this trans-oceanic activity diminished is a fascinating subject- with epidemics, climate change, the Reformation, and economic/political warfare in Scandinavia all playing a part.

The deCODE project in Iceland fascinates me, this discovery in particular. Mitochondrial DNA, represent!

Mary ~ Did you ever read Jar City or see the movie? Murder mystery in Iceland with a big dose of genetics:

Jar City sounds good - have read one of Indridason's other books and liked it.

Do you know anything about Michael Fortun's "Promising Genomics: Iceland and deCODE Genetics in a World of Speculation"? Found it on amazon.com

Mary ~ the deCode book looks great, I hadn't heard of it. I think it will go into my annual "Amazon Iceland Xmas" list.