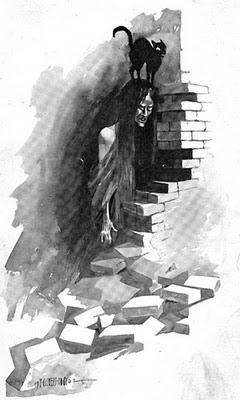 Looking through the kitchen window the other day, I saw a strange cat by the garage. It was a gray tabby, gingerly treading about the withered plants which lined the driveway. Its movements were odd, very tentative, as if its paws were hurt. Not one to be antisocial, I went outside and called "Kitty, kitty, kitty" but received no acknowledgment. The cat's head turned, but it did not look at me. Its eyes were blue, not a common color in tabbies.

I was getting cold, I went back inside to get a jacket. When I got back the cat was gone. I walked around the side of the garage and saw it sitting in the dry leaves under a lawn chair. I walked closer and called again, but the cat sat still, not responding to either my voice or my presence. Walking even closer, I could see that the poor creature's eyes were clouded with cataracts. I turned around and left him there.

How did it come to pass that a blind, and possibly deaf, cat was traveling through the neighborhood? It had no collar- was it feral? If it was, how did it survive in the wild with such handicaps? I thought of bringing it in, but if it really was a feral that would be a foolhardy move. Was it an elderly house pet who had left the security of home and had been wandering for days, searching for a way back? Or was it a cat which had been abandoned? What would I do with a cat, a blind one at that? We've never had cats in the house; it would require a complete commitment and a big change in our lifestyle- that sounds really shallow, I know, but it is true. If I left it outside, it wouldn't be long for this world, not with freezing temps and a winter's worth of snow coming.

Later, after doing some chores, I returned to the back yard. The cat was gone.

I can't save the whole world. More shallowness.

I couldn't even save a cat.

Was this visit really a portent of my own demise? Old, cold, blind and alone, searching for a place to curl up and await death's release: the end of all suffering.

I have similar moral problems often. Most recently, it was a hitchhiker. I didn't pick him up one day and felt terrible about it. Then I saw him again, and righted the wrong by picking him up. But he didn't really need me. He was someone who just hitchhikes so as to meet new people.

Hopefully the cat was just out and about to socialize, too.

Cellar Door ~ I can hear Joni Mitchell's Coyote playing on the car stereo...

Jon ~ Just like drinking- One is just right, two is too many, and three is never enough!