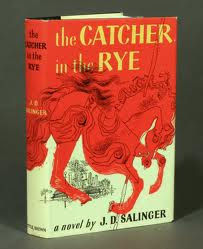 The Catcher in the Rye by J. D. Salinger

I have a helluva lot of trouble just finding what I want to read, for God's sake, if you know what I mean. Anyway, I keep looking around the house, waiting for a good book to show up. Finally, on the piano bench, I see a copy of The Catcher in the Rye, written by some moron who used to try to give the time to Joyce Maynard. I started reading it, and I thought "This book stinks" and kept on. What a phoney. I had a couple of Scotch and sodas, and kept reading about this guy who was being kicked out of some terrible school. He would sweet talk the mothers of his classmates (how nauseating!) when he was taking the train to NYC, and and then went to some cheap hotels and dive bars and was trying to make time with some girls and failing. That killed me.

And then he goes home and talks to his 10 year old sister Old Phoebe about the teachers that would make him puke; that they were such phonies, thinking they were goddam princes or something. And then he started to cry, and went over to one of his old teachers place, and he was a flit and then he was downtown and it was almost Christmas and a million little kids were downtown with their mothers and he went to a movie, and it was so putrid he couldn't take his eyes off it. And every time he stepped off a goddam curb he started thinking about his dead brother, and he met up with Old Phoebe and she rode the carrousel and she looked so damn nice the way she kept going around and around in her blue coat and all.

And that's all I'm going to tell about. If you want to know the truth, I don't know what I think about it.

the trick is to read it when you're 16. It changed my life when I did. Just the right amount of rebelism for that age. Now....I have come to realize how REALLY to rebel...

Heida ~ I missed it then, I was into Aldous Huxley. BTW, that was the fastest response I've ever got for a post!

This just killed me. You got it down perfect, Professor. Every time I read this book I love it more. Why don't you try Edisto next--another unique, believable voice; another unforgettable character. You just know you know someone who will send it to you.
Like your new pic.

I didn't read this at 16 either. I read Sylvia Plath. I read The Catcher in the Rye much later but liked it a lot. It is still amazing how many people would like to see this banned.

How about starting a new review series where each piece is written in the voice of the protagonist?
Please?

Rose ~ It might be amusing to to make a time line of stream-of consciousness novels- Catcher in the 40's, On the Road in the 50's, Edisto for the 80's, there are probably innumerable candidates for the 60's.

Caroline ~ Sylvia Plath! "There is nothing like puking with somebody to make you into old friends."

Niranjana ~ I wish I was that good a writer.

I, too read 'the Catcher' back in "high" school, but for a different reason than usual. I was a student librarian when the issue came about on removing that book from the library catalog. Of course, then I HAD to read it.

Norman: you hit on it! That's the great thing about trying to ban books, isn't it!

Thanks for mentioning Edisto. It sounds intriguing and I just ordered it. Yeah, Sylvia Plath no less. Those were dark times...

Caroline, I'd love to hear what you think of Edisto. I don't think a lot of people have read it, but I'm glad to have discovered it.

I will let you know when I post a review. It will take some time until I will get it and I'm a bit slow these days when it comes to reading but I'm glad you mentioned it. It sounds very interesting.

I know a little boy named after Holden Caulfield.

This was the first book I read in Swedish, strangely. I was seventeen. One very lonely week, that book was my only friend. It's nice to see it make new friends of its own.