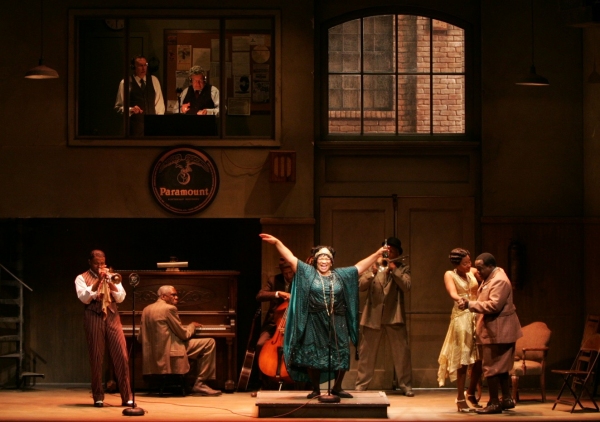 This gritty production of one of August Wilson's most successful plays fearlessly examines the meaning of race in the milieu of 1920's Jazz musicians. Set entirely in the environs of a recording studio, Wilson explores what it means to be black in America- through the conversation between the members of Ma Rainey's recording band.

Any play with music, especially one which is not a musical, usually runs into the problem of the music not being at the same level as the drama. It's understandable, great performances of music are usually at the very highest level of artistic achievement, to expect an actor to reach this height is unfair. In this play, thanks to the incendiary but all too-brief performances by Jevetta Steele as Ma Rainey, the music surpasses the drama.

This does not diminish the performances of a fine ensemble, led by James T. Alfred as the talented but troubled trumpeter Levee. Levee aspires to greatness, but is stifled by the traditional Ma Rainey, the unscrupulous white manager and record producer, but mostly by his own past, where violence is his weapon of first resort.

Music and drama overlap, they reinforce each other. Drama without music can be very austere, well used music can heighten emotional states, define the mood and advance the action. Music without drama can become insipid or listless. When they truly blend, as they do here, it brings the production to an emotional place either would be hard put to achieve on their own. Kudos to Sanford Moore, music director.

I was left musing on the meaning of race relations in my life. I grew up in a racially integrated neighborhood with some, but limited, interaction with people of color. There was racism, some of it virulent, but it was always there, and, as it was for Levee, it was a trap, a waste of time and a squandering of the human spirit for everyone.

I saw this play at Yale, before it came to Broadway, and liked it. However, August Wilson overlooked one fact, which struck the historian in me. This play centered around a generational gap between the young trumpeter and his older fellow band members. We tend to associate traditional jazz with aged musicians, so most people would probably not notice, but in the 1920s, jazz was still new and its players were young.

That's a good point, Chris. I think August was trying to contrast Levee's yearning to play "hot" Jazz with Ma Rainey's more traditional Blues. Ma would have been about 41 at the time she recorded Black Bottom, I wonder if any of her band members went back with her to her minstrel show days with the Rabbit Foot Minstrels?

I live in Northeastern Michigan, and grew up not ever having consciously seen a person of color. In elementary school(parochial), in maybe 1960 or so, A black man from Africa (an African African) was brought into school, and gave an amusing presentation on being a "colored" person in America. That put a face on the music I fell in love with as a young person with my entertainment being (besides Mad magazine) the old stand up radio, which allowed me exposure to music other than the white bread, Pat Boone versions on popular radio. I never understood racial bias, and got a mere taste of it once I was away from my parents and grew my hair.(damn hippies). Bigots are everywhere, even in my hometown, where black folk are far between.