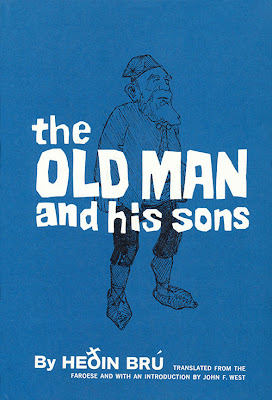 The Old Man and His Sons

A novel by Heðin Brú
Translated from the Faroese and with
an introduction by John F. West
Paul S. Eriksson publisher, New York, 1970

This is the final entry in my Faroese authors series. It was first published in 1940 (Feðgar á ferð) and it reflects the turmoil of the change from a primitive society to a more modern one. Ketil, a vital seventy-year-old, is caught between his traditional self-sufficient hunter-fisher-farmer existence and his sons' lives of working for wages and living on credit. The story starts with an intensely graphic account of a whale massacre. After the slaughter Ketil overbids on a quantity of whale meat because he doubts if he'll have the strength to participate again. The rest of the book deals with Ketil's efforts to raise money to pay for the whale meat while trying to deal with his unsympathetic adult chidren.

The writing is pithy, dryly ironic at times, and extremely down to earth. The introduction mentions how Faroese is a very concrete language and abstractions are not common. The book is simple in its language, but Brú's mastery of understatement and his use of dialog to examine the issues of generational conflict and aging make this a surprisingly moving story. One thing this novel shares with the others I've recently reviewed (The Lost Musicians and Barbara) is its open-ended resolution. Life goes on.

Recommended, but Brú's terse writing and his humble protagonist's lifestyle may not suit every taste.