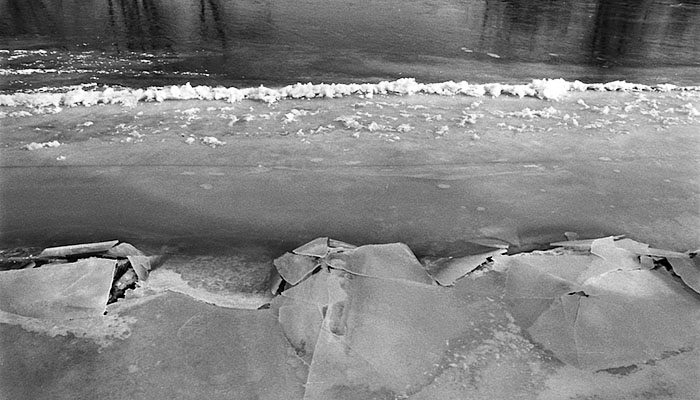 When I was young and the weather would turn cold, in late November or early December, I would head down to the Mississippi River to savor the crisp, translucent ice that formed along the shore. Large shelves of luminescent crystal, with the burble of the running water underneath a siren's call for daring exploration. Every child in our neighborhood had been instructed to stay away from the river, especially in the winter, you could never tell where it was too thin to support you.

But that was the challenge. It was a game, pointless in that you won nothing, nothing except the absence of an icy soaking (which you already possessed by staying on the shore!) While you were working up your nerve you would hear the ice crack, or see a large shard break off; there was absolutely nothing to give you reassurance that your little game would end in anything but disaster. Of course, if you weren't ready to tackle the mighty Mississippi, you could try your luck on tiny Shingle Creek, 12 feet wide and only 3 or 4 feet deep, at worst you might get a wet foot, or perhaps a soaking up to your knee. It was pretty tame, and grew old quickly. So sooner or later you ended up on the big ice, on the river, and by some miracle of divine intervention you didn't die.

Although some were braver than you: 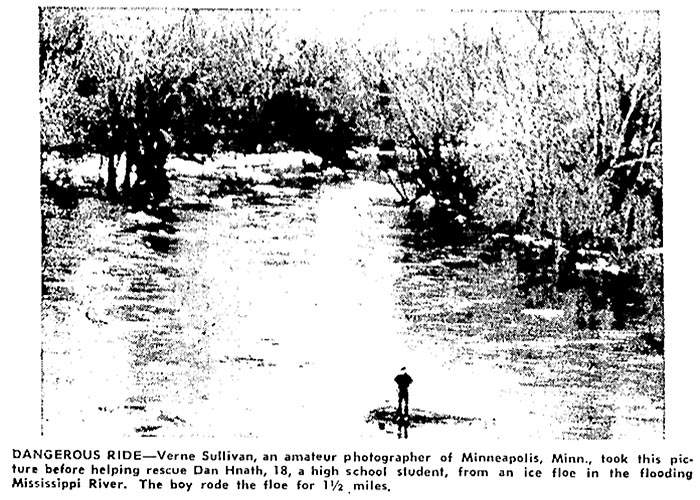 Dan didn't die either, and that was truly a divine intervention.

When I was in seventh grade, we moved across the Thunder Bay River to the North Side, and the distance to and from school went from one half block to eight blocks, while our new house was directly across the river. So, of course, in winter till early spring we would walk across the ice to school. One spring morning, one leg went thru the ice at a fishing hole, and I arrived with a soaking leg, only to be caught by the nuns, and reprimanded in front of the eighth grade class, a humiliating experience. THEN, surely as ice is thin, the parents were told, and me, not learning my lesson, got caught by them,crossing the ice returning home. Your litle tale brings my own silly youth back to mind.