This is chapter 1 of Window Weather, a serial fiction novel on FITK 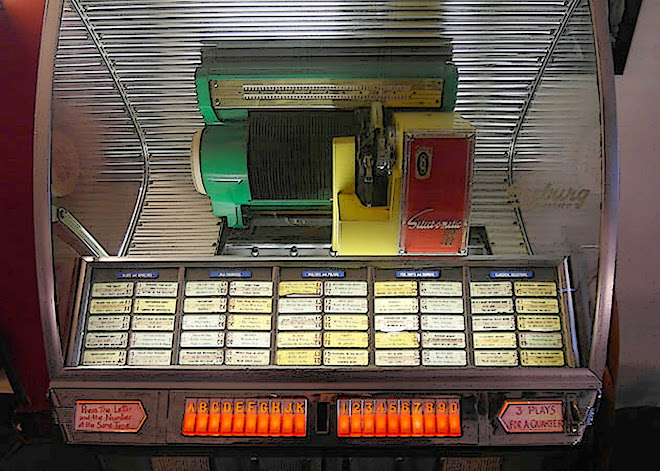 The couple in the grimy sedan pulled into a dusty roadhouse–but not for a beer. They had too many miles to go before they could start drinking again. They just needed a break from the heat and the road and the sun and all that monotonous farmland. Stultifying. The only features breaking the horizon line were the rows of other-worldly wind turbines that marched across the terrain.

The roadhouse was a small place decorated with beer signs and worn-out farm implements. There was a stage in the corner for the weekend bands. After the noise of the wind and the tires on the road the tavern seemed profoundly still. The bartender was restocking the bar; Sean Carroll, out of work data analyst and Molly Berenson, currently unemployed MBA, were his only customers.

“Hey, play something while I hit the john,” Molly said. The nearly empty roadhouse was that quiet. The joint was a throw-back—it still had a jukebox.  The Seeburg held mostly Country Music, or what passed for it nowadays, but Sean still managed to find a dollar’s worth of listenable tunes. He sat down at a corner table as the music began to play. The bartender brought their drinks to the table. Molly came out of the restroom. She had washed her face but hadn’t redone her makeup. There was not much point in that—not when you were going back out to a humid ninety degrees in a car without A/C.

It had been too noisy to talk in the car and now, as the couple drank their sours, they continued to exercise their right to remain silent. The last song started; it had an old Fred Rose lyric that Sean liked:


Every night alone I miss her
Her eyes blue as a clear sky after rain
She told me soon she’d be returning
I still see her at the train...

“You would have to play that song.”

They had met the week before, hitting it off quickly, but with only as much ardor as two people who have been through the routine more than twice are capable of. Love may be wonderful the second time around, but not so much the third. There weren’t many illusions between them, but there were many unread pages in their life stories.

“Sorry, it’s just something out of my past. It’s nothing really, there’s no way you could have known," Molly said.

Sean tried not to gulp his lemonade.


The motel room was dark, only a faint glow from the lights in the parking lot leaked through the window shade. A sliver of light from under the bathroom door was the only other source of illumination. Cool, if somewhat musty, air blew from the air conditioner. Molly was in the shower. After a while, the sound of running water stopped and a few minutes later she came out of the bathroom dressed in a full slip.

“This sure beats those sweaty jeans I was wearing… ”

The previous 12 hours Molly and Sean had spent on the plains in a hot car was just a rapidly fading bad dream now. Tomorrow, they would leave South Dakota behind and head northwest into Montana and then go through the Rockies. It would be cooler there.  They would reach Seattle late tomorrow night. Molly had a lead on an office job; her mother lived there in a duplex with a basement apartment that Molly and Sean could rent cheaply enough. Sean had a job lead as well. He was looking for something more stimulating than his last one was: sitting in a cubicle with a monitor and a telephone.

“I don’t have anything nearly as provocative,” he said, “But after I shower I’ll put on a clean tee.”

As Sean stood under the shower he thought about the previous week. How Molly had entered his life. He had been living alone too long. His usual reluctance against starting a new relationship was dissolved by their second bottle of wine. Sean wasn’t worried about what could go wrong. Not like those other times he had fallen in love. Maybe the difference was that now he just didn’t care about ‘passion’ anymore. This time, without any unrealistic expectations, things seemed to be going better.

As Sean stepped out of the shower he realized that his clean clothes were still in his suitcase—on the luggage rack by the bed. He thought about just walking out naked but he and Molly hadn’t quite yet reached the stage of ‘casual’ nudity. He wrapped a towel around his waist and headed out.

As she grabbed his arms her lips parted—her teeth reflected the light from the open bathroom door. She playfully lunged at Sean with her open mouth but misjudged the distance. As her teeth sank into his chest her jaws clamped shut—hard—forming a pair of red semicircles on the skin—just over his heart. He began to bleed.

“That’s alright, it was only a reflex action.”

Molly turned Sean around so that the light from the bathroom fell on his chest.

“Just wait and see… you’ll find I can leave all sorts of marks,” said Molly

“A biter. I would never have thought it… ” said Sean, shaking his head.

"Go back and turn off the light," said Molly, “… and leave the towel.”

A red smear of blood began to ooze down Sean’s chest.

“I’ll need a couple of band-aids first,” said Sean, “That bite really might leave a mark.”