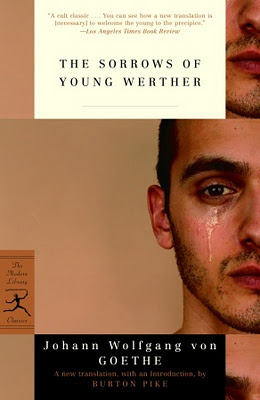 The Sorrows of Young Werther
by Johann Wolfgang von Goethe

This book (the blockbuster of 1774) is the story of a troubled young man whose conflicts were almost entirely internal. It was Goethe's breakthrough novel with an almost cult-like devotion among its admirers and numerous parodies from its detractors. It has been credited as the spark which ignited romantic literature. It remains a perennial favorite and is no doubt the inspiration of thousands of stories of unrequited love. I received a copy courtesy of Music Box Films via Caroline at Beauty is a Sleeping Cat as part of her German Literature Month theme last year (thanks Caroline!)

It's hard to review a classic of literature- one which has stood the test of time and has had a life of its own since its publication. It really isn't a coming-of-age book either, for Young Werther fails to achieve any sort of insight or maturity- a good part of the book's appeal is in its shocking, messy and most unhappy ending. Werther's situation is almost a case study of manic-depression, where he goes from the highest peak of euphoria to the depths of despair, often between chapters. Written in the form of letters and journal entries (with comments from the "editor"), the book's form had a definite appeal to my voyeur instinct. While a very short book its florid language made it read much longer. Werther's "suffering" quickly came to be a bit much- at least for this reader.

We read this at 16 in school and it was very dramatic. More than one person was tempted to follow the example. I think it's an age when reading such an over-emotional, book isn't entirely without danger. Very emo, indeed.
I have no idea how I would like it now.
Those who reviewed it during German literature month either loved or hated it.

It sounds a bit dry? Think I'll give it a miss!

Caroline~ I could see how it could adversely affect a young reader, I was a bit of a "Young Werther" myself!

I think I'm too old to do the emotional yo-yo thing, but I did occasionally wallow in self-pity as a teenager.