This is chapter 4 of Window Weather, a serial fiction novel on FITK 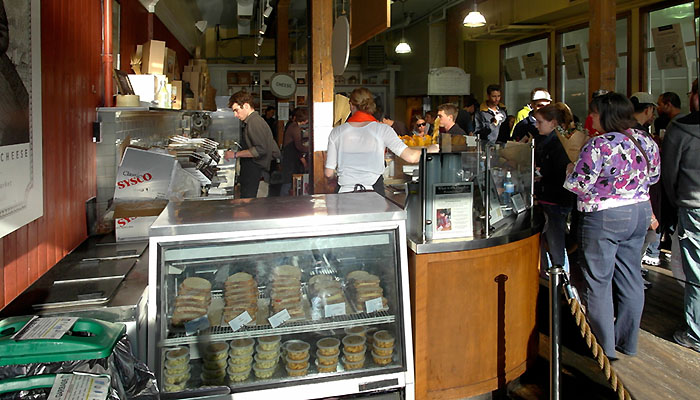 The deli on Pike Place was crowded, as it always was on a Saturday afternoon. The pastrami on sourdough was billed as ‘Seattle’s best.’

“You’ve never spoken of your Father,” said Molly, thinking that had this conversation was long overdue. If Sean was avoiding it, it might have been that he felt that there was little to say.

“Do you want the official version or my speculations? It’s really not much of a story…”

Molly’s eyes narrowed. “Both. Start with the ‘official’ one.”

“My mother didn’t like to talk about him. Whenever she did, which was only after I asked, she said that she didn’t know. She had been, by her own admission, ‘more than a little wild’ when she attended college, but she also said she didn’t regret having me. That much was clear by the way she raised me.”

“What do you think?” said Molly. She wasn’t buying that version. Sean didn’t either—once he was old enough to know a little about how the world works.

“I’m not going to call mom a liar, especially since she isn’t around to defend herself, but I think she knew who my father was and knew him well,” said Sean, “I think she was always in contact with him. She made phone calls late at night. Those were the only times that she would lock herself in her bedroom. When I was a junior in high school and thinking about college there had been several of these sessions. After the calls, she would be obviously upset. When I was accepted at CMU the calls seemed to stop.”

“Why Carnegie Mellon?” said Molly, “You were smart enough for MIT.”

“CMU had always been one of the better schools in computer science, and they were far ahead with the development of their information systems’ real-world applications. I really only had one chance of making it and they seemed to be my best shot.”

“So, do you think your mother was talking to your father?” asked Molly.

“I suppose so, maybe I’m just projecting—searching for someone who may not even exist.”

“And… your mother died in a car crash,” said Molly, “Just after you went away to school?”

“Yes. Her life insurance paid for my college, that was her legacy.”

“Do you have any other relatives, O man of mysteries?”

“There’s my mother’s sister Tina, she lives in Iowa.”

“That’s why do you it.” said Molly, smiling slightly.

“Your job. You’re a searcher. I could see it in your eyes, even when I first met you,” Molly said, “You’re looking for your father, and a replacement for your mother, aren’t you? But you find it hard to connect with anyone in real life. That’s why you work with those spooks.” Molly said. She was no longer smiling.

“We prefer to be called ‘information specialists.’ The guys are alright—really—but yeah, they are a different breed.”

“No socializing, no company picnics, no nothing outside of work?”

“I know how it is,” Molly said, “I was looking for something too. I was tired of living alone.”


There is only so much data crunching that a man is able to endure. Opening a window and looking out over the Pike Place Market, Sean was trying to remember the breathing exercises he had been taught in the “Freshman Wellness” class he had taken in college orientation—where he had met Billy. Sean’s current project at ADR. It was a project he needed a break from. Billy was Senator William Clarkson’s wayward progeny. The Senator was making a run for the Presidency and his son, William Jr. (who had a long history of wildness), had disappeared. This situation was becoming a problem for the Senator’s campaign. It wouldn’t be long before a nosy reporter doing a feature on the families of the candidates would realize that there might be a good ‘prodigal son’ story about Billy or, what they would like even better, a really sleazy exposé. As Sean did his ‘cleansing breaths,’ he tried to clear his mind. The current inversion layer over Seattle didn’t help his mental state either. The aroma from all the coffee being roasted in the city did perk him up, however.

Working for a state-of-the-art data-mining operation meant that Sean had access to the Google crawlers—and their raw data. This was not the ‘free’ search results they gave to consumers, this was the stuff they sold to marketers, corporations, and governments. Billy had been careful in never leaving any personal ID on the net, but Sean had enough information about Billy and his behavior that he was able to begin a search for Billy’s whereabouts. Creating a search based on all of the information about Billy that he could find, Sean got the results that were reduced to a couple of thousand ‘hits.’ Looking at this group with some additional filters brought the pool down to a couple of dozen—a much more manageable number. What Sean really needed was Billy’s credit card activity. To get this meant going beyond the usual search protocol—which was highly illegal.

ADR had been in touch with the Senator’s damage control team. For obvious reasons, the Senator’s people couldn’t go where ADR could, but they were able to furnish a trust fund number from the Senator. The fund made regular deposits to a blind trust; it had been set up to insulate the Senator from Billy’s shenanigans. Sean’s current task was trying to get monitoring access of that account. He found that had he was able to tap an underpaid low-level wage slave who worked in the bank. Sean had another ace up his sleeve as well: when he was Billy’s roommate, Sean had plugged into Billy’s desktop computer and, just to see if he could do it, mirrored the whole thing. Sean had never done anything with that data then—it was encoded—but it was still stored on an old hard drive—a hard drive which was in storage with the rest of Sean’s college things at his aunt Tina’s house. That hard drive was now in transit to Sean, to be examined by ADR's cryptologists.

Looking down on the street vendors selling their tacky tees and cheap blouses, Sean was reminded of his old college ‘wardrobe’: similar junk, basically style-less, sometimes even tasteless. Since then, Sean had graduated to tailored shirts and slacks. He was more preppy now, on the other side of thirty, than he had been when he was in school.

Sean wondered if Billy had changed his style as well.