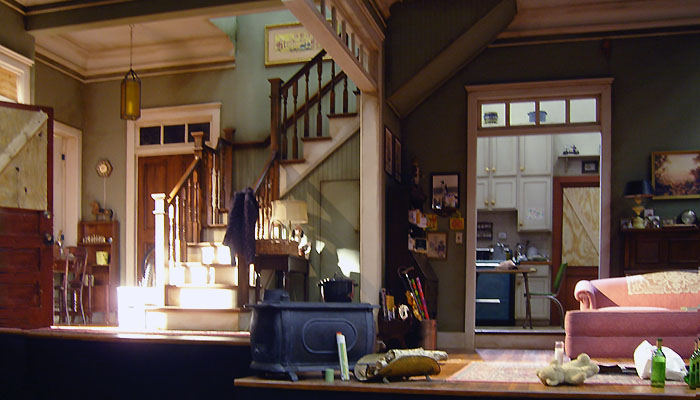 I'm a sucker for completely original theater, either in a new production or by a radical re-workings of a classic. I'll take a chance, even knowing that most productions of new work are flawed in some way, but I know that I'll experience something which hasn't been done to death for the last 40 (or 400) years. Sometimes the results are stunning. Sometimes, such as last Saturday night's performance of Conor McPherson's play (very loosely based on the Daphne du Maurier short story) the result leaves the viewer scratching his head in wonder.

The play opens with Nat (J.C. Cutler) lying on a couch, in a delirium. Diane's (Angela Timberman) voice is heard in a voice-over(!) explaining the situation. Birds have been attacking and the middle-aged man and woman find themselves trapped in an isolated farmhouse. Soon, young Julia (Summer Hagen) arrives. She had been in a group of survivors, assaulted and then fled when she was found wandering and taken in. Soon her impetuous behavior rankles Julia while attracting Nat's attention. Diane is a writer, and as she journals the decay of the group's fragile relationship (also heard in voice-over!!) she becomes a mother-crone, ultimately driving Julia away after meeting another survivor (Stephan Yoakam) who wants Diane's companionship—and who may have had a previous sexual relationship with Julia.

All of the action takes place in the set shown above. From time to time the birds batter the house (those must be pretty big birds!). Between these attacks the cast members attack each other. There are some tangential Biblical themes worked in as well, but none of it amounts to much. The dialog remains awkward throughout, peppered with gratuitous F-bombs, and any flow is interrupted by the disjointed time-compression, the action takes place over several weeks, with day and night scenes alternating. This play might have worked better as an intense real-time drama. With the premise being the only thing carried over from the original story (and its best feature) this play remains a bit of a mess. It was originally done for a festival in 2009 and retains an unfinished feel. I ended up rooting for the birds.